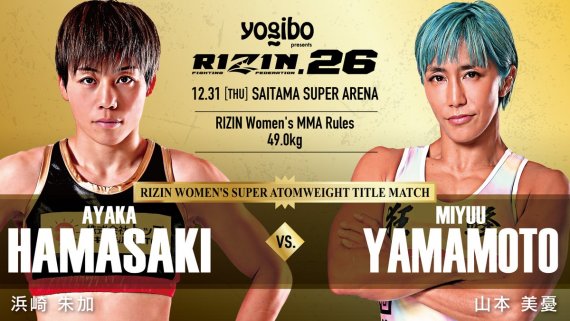 Yamamoto and Ham initially squared off in October 2019, with Ham
winning by second round technical knockout at Rizin 19.

“Miuyuu Yamamoto has been an idol of mine for such a long time. I
am very excited to be facing her on such a great stage,” Ham said.
“Please look forward to a great masterpiece on a great night and
great stage against a great opponent. Miyuu’s physical strength is
outstanding and she has grown as a fighter, I don’t think I will be
able to beat her easily.”

“I’m very excited and grateful to be able to perform in the
platform I’ve been watching my entire life,” Ota said. “I hear many
people saying I’m taking MMA lightly, but I am aware of that. But I
have been training hard and there is a reason why I decided to make
my debut. I have no plans to lose.”

Rizin 26 takes place at Saitama Super Arena in Saitama, Japan, on
Dec. 31 and is headlined by a bantamweight championship rematch
between Kai Asakura
and Kyoji
Horiguchi. Fans will be allowed to attend the event in a
limited capacity. While the Japanese promotion typically holds
three consecutive events at the end of the year, the ongoing
COVID-19 pandemic allows for only one in 2020.

Four other fights were confirmed for Rizin 26: Kyohei
Hagiwara vs. Ren Hiramoto at a 150-pound catchweight; Yuki Motoya
vs. Naoki Inoue
at bantamweight; Yuta Sasaki
vs. Kenta
Takizawa at bantamweight and Kanna
Asakura vs. Ai Shimizu
at atomweight.

The Rizin atomweight crown was vacated earlier this year by
Seo Hee
Ham, who is rumored to have signed with One Championship.
Hamasaki lost to Ham via split decision in an atomweight title bout
at Rizin 20 on Dec. 31, 2019. Hamasaki returned to the win colum
with a submission of Tomo
Maesawa at Rizin 22 on Aug. 9.

Yamamoto rebounded from the loss to Ham in her most recent outing,
when she outpointed Suwanan
Boonsorn at Rizin 20.