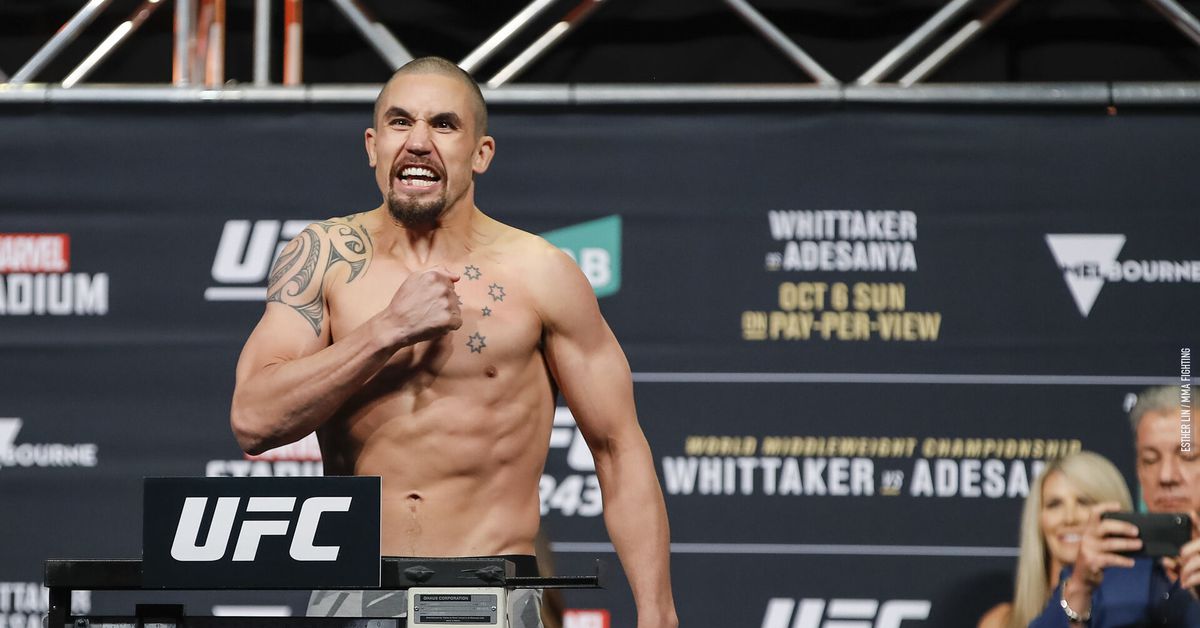 Robert Whittaker is back on the winning track and he expects to continue rolling as he heads into a possible No. 1 contender’s bout this Saturday.

It’s assumed that Whittaker’s UFC 254 opponent Jared Cannonier will be next in line to challenge current middleweight champion Israel Adesanya should he defeat Whittaker. The path to a title shot isn’t as clear for Whittaker, who dropped a UFC belt to Adesanya 12 months ago.

Since then Whittaker has been candid about the “burn out” he felt during his run as champion and made a successful return to action with a unanimous decision win over Darren Till in July. “The Reaper” spoke to the media in Abu Dhabi on Tuesday ahead of his fight with Cannonier and while he regards Cannonier as a major challenge, he’s also confident in the outcome.

“He’s very tough, he’s very powerful, he has knockout power, and he’s resilient, he never goes away,” Whittaker continued. “But honestly, I just think I’m better across the board. I think I can take this fight wherever I want it to go. I can lead this dance. I think I can sting him, I can knock him out. I can do anything I want and I have 15 minutes to do that, which is better than 25, so I’m looking forward to it.”

Whittaker and Cannonier were first scheduled to fight at a March 7 show, but the booking fell through when Whittaker withdrew for what were undisclosed reasons at the time and Cannonier later suffered an injury that removed him from the card.

In the seven months since, Whittaker has expressed a newfound passion for training and competition, which is in contrast to the negative atmosphere in the lead-up to the first time he was supposed to fight Cannonier.

“This time around is very, very different just in the fact that I want to train,” Whittaker said. “I want to fight. I want to beat him. I want to be here. Whereas when I was leading up to him the first time, I didn’t care. I didn’t care. I was just going through the paces, just doing what I thought I had to do, because that’s what being burnt out is. You’re just trudging along.

“So this preparation’s been completely different to the first one, but then that fight was never meant to be anyway. He got injured two weeks before we were supposed to fight. So everything happens for a reason.”

Whittaker deflected questions about whether or not he should be next to challenge for the middleweight title with a win Saturday, explaining that at the moment he’s paying little attention to what the rest of the division is doing. An impressive performance against Cannonier could propel Whittaker into a rematch with Adesanya, but he doesn’t feel like “The Last Stylebender” is obligated to grant him one.

“I don’t think anyone owes anybody anything,” Whittaker said. “I just want to fight Jared right now. I’m not really thinking about it at all. Whatever [Adesanya] wants to do he can do. He can fight anyone, I don’t care. Honestly, I just want to take this fight, go out there and do my best, and go home, just cruise out, enjoy Christmas.”

As adamant as he is about not fighting again until 2021, Whittaker did take a moment to think when asked how he’d feel about possibly booking a title fight in November if the option was presented to him.

“Aw, f*ck,” Whittaker said. “I don’t know. (long pause) I’ll worry about that then, honestly, because I’d have to talk it out with my team and if they thought it was the best move, they’d have a hell of a convincing job ahead of them. Otherwise, I don’t have to worry about it. The only fight that’s in my sights is Saturday and that’s the only one that matters at this point.”