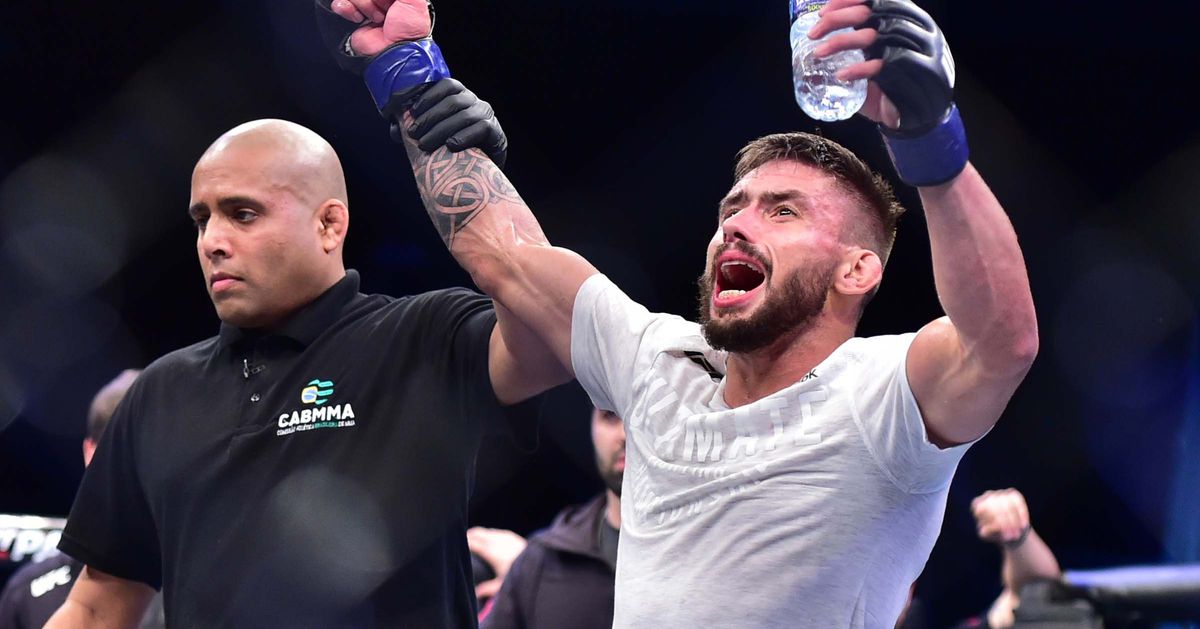 Rogerio Bontorin competed as a bantamweight throughout his MMA career, but agreed to cut extra 10 pounds when the UFC call finally came.

Bontorin will enter the Octagon for the fourth time as a flyweight at Saturday’s UFC Rio Rancho, taking on Ray Borg after winning three in a row at Dana White’s Contender Series and the UFC. He hasn’t missed weight once, but explains how hard it is to hit the 125-pound limit 36 hours before a fight.

“I’m in this weight class because that’s the spot that was open,” Bontorin told MMA Fighting, revealing he will eventually move back to bantamweight in the future when his body no longer can handle the cut.

“For now, while I still can make weight, I’ll stay here,” he said. “It depends on my body. I’m still getting used to the weight class, actually. I only fought three times in this division, but it’s working for now.”

It’s definitely “working” since Bontorin hasn’t weighed over 125.5 pounds for his UFC and Contender Series appearances, but it comes with a price. The UFC fighter said he hasn’t eaten anything since Monday, and still had 12.8 pounds left to cut to hit the 126 mark as of Wednesday afternoon.

When asked what “anything” exactly meant, Bontorin doubled down.

“Nothing,” he said with a laugh. “Since Monday.”

Bontorin trains twice a day for as much as his body allows him to, and plans on getting rid of the last few pounds on a hot tub on Thursday.

“I still can do it,” Bontorin said. “When I can’t no more, then I’ll think about going back (to bantamweight).”

The Brazilian prospect, who turns 28 in April, racked up a 16-1 record since 2013 with UFC wins over Magomed Bibulatov and Raulian Paiva. Bontorin is currently ranked at No. 7 in the official UFC list and sees a “shorter path” to the UFC belt compared to the confusing title picture at bantamweight.

Born is the most recognizable opponent of his MMA career, but Bontorin doesn’t see him as his toughest test to date.

“It’s an important fight because of his name, but all fights are tough,” Bontorin said. “I won’t let that add an extra weight in my head. He has a name, but I have more fights and more wins than him.”

Borg is returning to the flyweight division after a decision victory over another Brazilian prospect in Gabriel Silva in July. “The Tazmexican Devil” hasn’t fought at 125 pounds since a defeat to then-flyweight king Demetrious Johnson in 2017, a stretch that includes a list of cancelled fights and a pair of bantamweight bouts.

Even though the 26-year-old fighter holds wins over talented competition like Jussier Formiga and Louis Smolka, Bontorin doesn’t seem that impressed.

“What he does is take people down, right? He’s a wrestler. That’s all I think he does,” Bontorin said. “Let’s see what happens in the fight. I’ve prepared myself for this because he trades a little bit on the feet in the beginning of the fight and then goes for a takedown, so let’s trade and see what happens.”