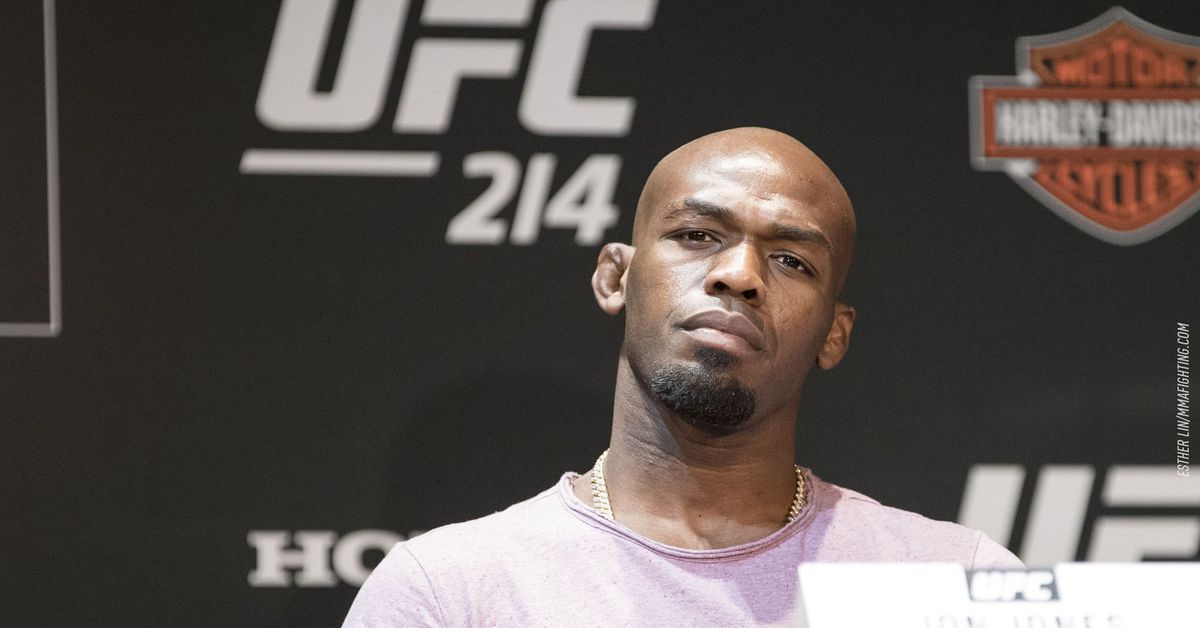 Jon Jones is still awaiting his day in court after he was arrested on charges of domestic violence in Las Vegas just hours after he was inducted into the UFC Hall of Fame.

While it’s unclear what kind of punishment Jones could potentially face, the police report on the incident painted an ugly picture that involved his fiancée having blood on her face and clothes and telling the responding officers that he allegedly got “a little bit” physical with her that night. Hotel security ended up contacting authorities after one of Jones’ children asked them “can you call the cops?” after the altercation.

Since that time, Jones has only made one public statement — a post on Instagram where he said he was giving up alcohol while also promising to “turn this nightmare into the best thing to ever happen in my life.” He also posted a video that was later deleted that showed Jones kissing his fiancée just days after the incident took place.

Of course, Jones has faced numerous arrests over the past decade since he first became UFC champion including several charges for DUI as well as a hit-and-run accident in 2015 that ended with a suspension and his light heavyweight title being stripped away. This latest arrest was much different, however, because it involved Jones allegedly assaulting his fiancée, which has resulted in harsher reactions from his peers and fans from around the world.

Reigning Bellator heavyweight champion Ryan Bader faced Jones while he was competing in the UFC and he saw the start of the legal issues that have plagued the former light heavyweight champion over the years. While he’s not going to convict Jones without giving him his day in court, Bader can’t help but feel like these charges could be the breaking point for his former opponent.

“People make mistakes — we don’t know all the facts or whatever — but if he did put hands on a woman, his fiancée, that’s the biggest scumbag move you can do and he should be gone if he did that, plain and simple,” Bader said when appearing on The Fighter vs. The Writer podcast.

Jones has sought redemption on more than one occasion in the past due to his myriad of legal entanglements but even with the domestic violence charges only being a misdemeanor in Nevada, this particular altercation could be the one that changes the course of his career forever.

While Jones has always taken personal responsibility for his actions in these previous arrests, Bader can’t help but wonder about the people he’s surrounding himself with if he keeps facing these same kind of legal issues over and over again.

“It’s the people around you, too,” Bader explained. “He’s gotta have somebody to say ‘hey, I know you’re in Vegas and you got inducted to the Hall of Fame, let’s just go in the hotel suite and party or whatever, we don’t need to be out.’ Keep it contained a little while. I think it’s the people around him that need to step up, too. Obviously, mistakes are going to be made but when you keep making them, something’s got to change. When you go to Vegas, maybe don’t go out. Go out around your friends at home or whatever it is.

“He’s got a lot of eyeballs on him. You just have to be more careful cause every single person is going to wait for you to make a mistake now. I think the moral of the story — if he did put his hands on a woman, he should be done. Don’t know all the facts but it keeps happening over and over again with him getting in trouble. He’s got to tighten it up.”

In his public statement, Jones also said that he has “way too much trauma to consume alcohol” and that he couldn’t handle it anymore.

While no one has condemned Jones for facing his personal demons, especially where addiction may be involved, Bader doesn’t believe that should absolve him from any wrongdoing.

“I’ve had friends, being around crazy ass wrestlers my whole life and all that, especially when you’re younger,” Bader said. “I’ve had friends, they start drinking and they’ll end up 300 miles away in Tijuana or something like that. But you get to a certain point where that’s enough or you get to a certain age where like alcohol’s a problem, I’m not going to drink or if I’m going to drink, I’m going to drink with my wife or with a couple friends at the house. I’m not going to go anywhere. Then you compound that with you’re a famous athlete. You’re Jon Jones, one of the best fighters in the world, everybody’s looking at you and noting everything that you do, you’ve got to be super careful.

“You would think there would be a breaking point. Like he said, he has trouble with alcohol — don’t drink alcohol, especially when you’re in Vegas and you have an event, people know you’re there. It’s one of those things, you’ve got to tighten up. If you want to indulge, do it in a safe place where you know you’re not going to get into trouble. It goes back to that putting hands on a female, that’s unexcusable.”

As of now, the UFC has not taking any action against Jones for his latest arrest, although the promotion does maintain a code of conduct that allows punishment to be handed out for any kind of behavior that’s deemed detrimental to the organization.

Much like the NFL and other major sports leagues, the UFC retains the right to punish its athletes under a broader scope of rules versus what can be legally proven in a court of law.

In other words, Jones just being arrested could potentially serve as a strike against him but the UFC hasn’t made any decisions regarding his future with the promotion.

For his part, Bader understands that the UFC is in an impossibly difficult situation because releasing Jones from his contract would just allow another promotion to swoop him up immediately — and there are a lot of organizations out there who would do it.

On the flipside, Jones facing no consequences in his professional life sends a terrible message for the UFC, which is now owned by a publicly traded company in Endeavor and that means they have to answer to stockholders now.

“I see both sides,” Bader said. “Do they want to let him go and get picked up by another promotion? Probably not. If he does something again that really injures somebody, hurts somebody, is there accountability on the UFC now for not stepping up and doing anything.