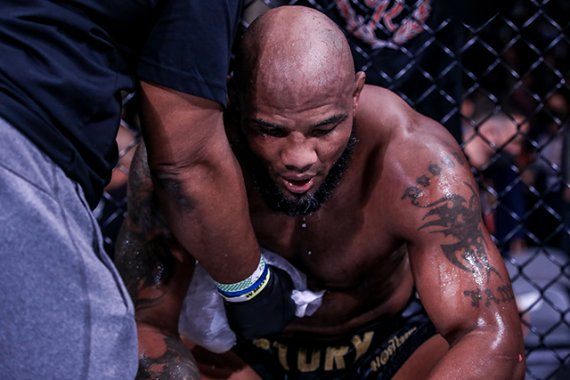 Yoel
Romero’s Bellator MMA debut didn’t go as planned, but promotion
head Scott Coker is confident that “The Soldier of God” still has
plenty left in the tank at 44 years old.

In his first fight since March 2020, Romero dropped a split
decision to Phil Davis in
the
Bellator 266 headliner at the SAP Arena in San Jose, Calif., on
Saturday night. The bout wasn’t as close as the scorecards
indicated, as Davis gradually imposed his will over the course of
the fight — including a dominant third stanza that saw him take
down the Olympic silver medalist repeatedly.

Coker was more impressed with Davis, a former Bellator champion,
than he was down on Romero’s performance.

“I think that Phil is an amazing fighter, as we all know, and he
just delivered another solid performance,” Coker told media the
Bellator 266 post-fight press conference. “He fought smart. Yoel is
still dangerous. If he hits you, it’s over. I think Phil probably
felt that power early on, so he tried to stick and move a little
bit. He took him down a couple times. I loved the fight. I thought
that it was a great fight. I’m telling you, Yoel will be back. This
is, to me, his comeback fight. It’s been how long since he fought?
We give him another fight, and he’ll be really, really ready for
the next one.

Romero hadn’t competed since a confounding decision loss to
Israel
Adesanya in a middleweight championship bout at UFC 248. He was
originally slated to take part in the Bellator light heavyweight
grand prix against Anthony
Johnson on May 7 before failed pre-fight medicals forced him
out of the bout. Coker expects that Romero will only get sharper in
his next Bellator appearance.

“Again, give this guy another camp and another big fight, I think
he’s going to come in and start throwing bombs on people,” Coker
said. “He’s a dangerous individual. You guys saw it. One punch, and
it’s going to be over. He’s that guy.”

At least in the immediate future, the Bellator president would like
for Romero to remain at light heavyweight. However, he wouldn’t
rule out Romero entering the title picture at 185 pounds, where he
had most of his success in the UFC, down the road.

“I’m going to talk to him, because I’d love for him to maybe fight
and maybe stay at 205,” Coker said. “Gegard [Mousasi] is going to
be busy beginning of next year fighting Austin [Vanderford]. If
that division opens up, and he wants to go down and fight the
winner of that fight, we’d love to do that, too. We have a lot of
exciting options for Romero, and I’m excited to put them all
together.”