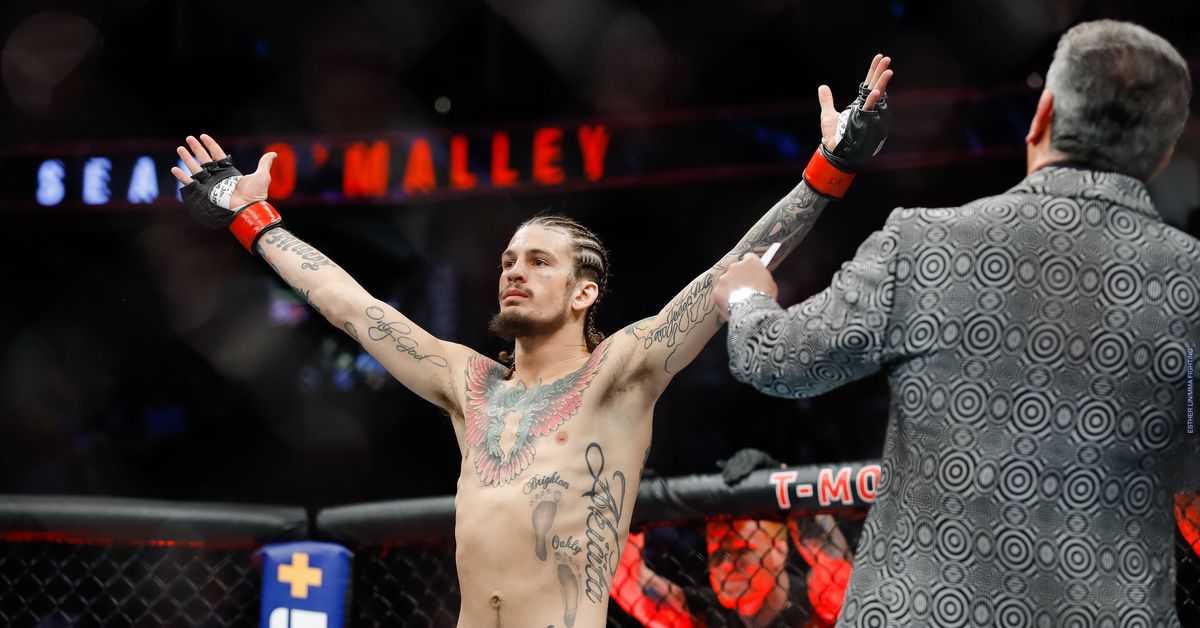 In only his fifth UFC fight, Sean O’Malley will serve as the co-main event for one of the most highly anticipated pay-per-view events of the year. To hear him tell it, this is exactly where he expected to be.

The 25-year-old bantamweight has quickly become one of the most talked about fighters on the entire roster. The attention picked up immediately after he appeared on the UFC’s radar.

In the second installment of Dana White’s Contender Series, O’Malley made an immediate impact with a devastating first-round knockout of Alfred Khashakyan to earn his UFC contract. The fact that the UFC president was so impressed by him only helped to put O’Malley on a fast track towards stardom.

Now despite sharing a card with a former heavyweight champion and two-time title contender also competing the same night, it’s O’Malley who will stand in the spotlight alongside Stipe Miocic and Daniel Cormier as the co-headliner at UFC 252.

If he had his way, O’Malley might remove that pesky co-main event label that keeps coming up whenever anybody mentions his fight with Marlon “Chito” Vera.

“It’s hard to imagine a better scenario,” O’Malley told MMA Fighting about his co-headliner spot. “It’s almost too good to be true. Co-main event on a legendary card, Stipe vs. D.C. trilogy. I don’t even think we’re the co-main event. I think we’re the first main event, they’re the second main event and I’m super excited.

“It couldn’t be a better spot on a better card to go out there and showcase my skills. So I’m extremely excited.”

O’Malley may not have a championship belt wrapped around his waist, or even a single digit next to his name in the official UFC rankings. But it’s impossible to deny the level of attraction he’s built in such a short period of time.

There’s no handbook to creating superstars in the UFC, but if there was it appears O’Malley is ready to rewrite the rules.

A nearly two-year layoff due to a pair of suspensions handed down from the United States Anti-Doping Agency—charges he vehemently denied—somehow had no effect on the fanfare around him, which spoke volumes about his drawing power.

Now in his third fight of the year, O’Malley jumps to a prime spot on a huge pay-per-view card, where he’s embracing the expectations that come along with this kind of moment.

“I’m 25 now – I think that two years really let me build my skill level and I definitely put the pressure on myself,” O’Malley said. “I don’t need to go out there and talk and say I’m going to knock these guys out, I’m going to do this, I’m going to do that. By me saying that adds to the so-called pressure in the anticipation of my next fight. So I’m definitely putting it on myself in a way. I could definitely go out there, not say anything, fight on a undercard like a lot of these guys and just get by and try to win fights but I enjoy talking. I speak my mind.

For this particular matchup, O’Malley called his shot because he wanted to revisit the fight with Vera after they were originally scheduled to meet over a year ago at UFC 238. Sadly that showdown was canceled due to O’Malley’s suspension from USADA.

He was excited about the matchup back then, and he might like it even more now that he’s had a year to grow and get better as a fighter. Add to that, O’Malley not only gets the opponent he wanted, but he’ll face off with Vera in a situation where he’ll see if the former Ultimate Fighter: Latin America competitor is actually ready to share the spotlight with him.

“I do kind of feel like once we’re both standing in the cage, and I’m staring across from him, we’ll see if he withers down or he rises to the occasion,” O’Malley said. “When I was first supposed to fight him and I tested positive for ostarine, I remember I went to the UFC and I saw him at the [Performance Institute] and he was continuing to fight, and I looked him in the eye and said I didn’t take anything, good luck. I felt like he was just thankful he didn’t have to fight me. I don’t think he wants this fight.

“It just so happens I was calling him out, UFC probably offered it to him and he’s not going to say no to an opportunity like this. But I don’t think he wants to fight me. I don’t know why he would want to. He’s going to try to take to take me down and he’s not going to be able to and I’m going to hit him on his chin over and over and over again. If he closes his eyes and imagines how this fight plays out, I don’t see how he sees it any other way than him getting knocked out.”

While he can’t say for certain how Vera is going to react on Saturday night, O’Malley couldn’t ask for a better spot, and he knows this is just the next logical step toward headlining pay-per-views of his own.

“These are big moments and I live for these big moments,” O’Malley said. “I feel like every fight’s the Super Bowl. Every fight’s a championship fight in my eyes. I just prepare as best I can and I think I’m getting it down pretty good.

“Everything, the weight, the training, the sparring, outside of camp and everything is just so dialed in, especially right now with back-to-back-to-back fight camps.”

A win at UFC 252 would definitely put O’Malley in an enviable position, especially after the bantamweight division just enjoyed a fresh start following Petr Yan being crowned the new champion with a TKO against Jose Aldo just a few weeks ago.

O’Malley teeters on the brink of becoming overwrought when discussing what he expects to be a bright future in the UFC and the longterm plans he has for in store for his career but he never loses sight of what’s standing directly in front of him. For the next six days, Vera will get all of his attention, and then he’ll consider what comes next.

“I definitely have to go out there and put Marlon away first and then kind of depending on the fashion of how I put him away,” O’Malley said when asked about what happens after UFC 252. “If I put him away the way I think I’m going to, a nasty knockout, put him face first into the canvas, I think I can pretty much ask for whoever I want but it just depends on how that fight plays out.

“I’m extremely focused and prepared, I have to fight Marlon for 15 minutes on Aug. 15 and I’m really not looking past that date.”