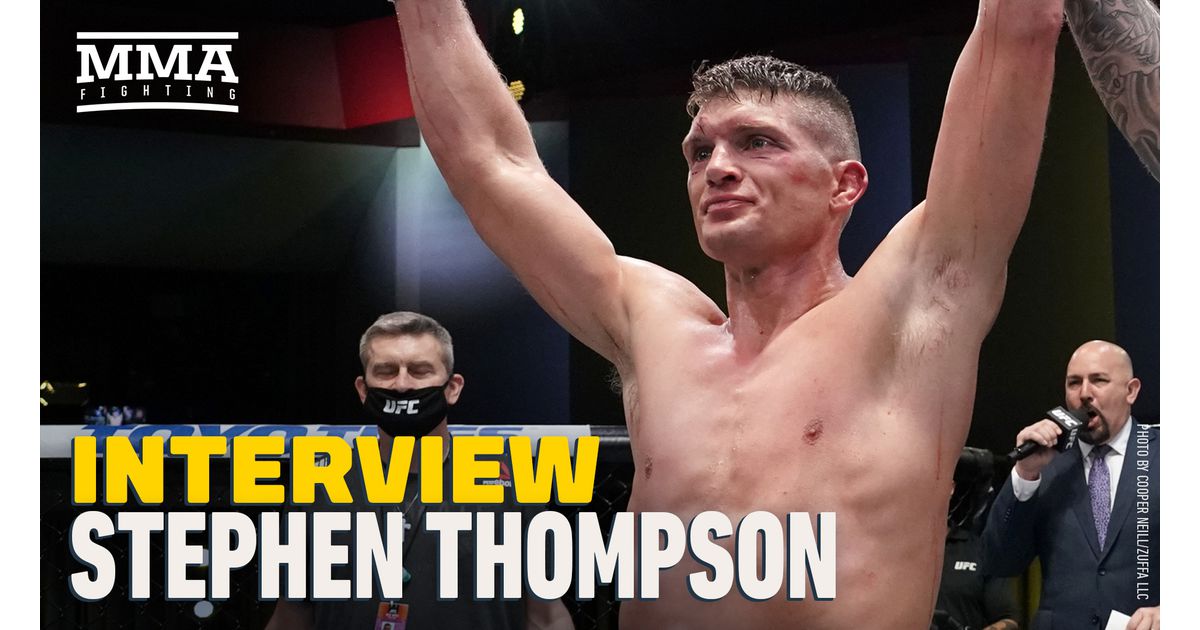 Stephen Thompson sees an opening towards a third crack at the UFC welterweight title and he’s aiming to sprint towards that bright light.

“Wonderboy,” who is currently ranked No. 5 in the division, is shooting his shot to be the next opponent for current champion Kamaru Usman, who recently defended his title with a third-round TKO win over Gilbert Burns at UFC 258.

Thompson is coming off of a dominant unanimous decision win over Geoff Neal in the main event of UFC Vegas 19 and kept a close eye on the championship showdown between former teammates earlier this month. The 38-year-old admits he was somewhat surprised by the champion’s gameplan to strike with Burns but, like most, was super impressed with his performance.

“Man, it just shows the evolution of Kamaru Usman,” Thompson told MMA Fighting while appearing on What the Heck. “I was looking to see the same old Usman out there, maybe taking him down, using his wrestling to nullify Gilbert Burns’ jiu-jitsu, but he’s very comfortable in his striking.

“I do believe, if we fought, he would definitely change gameplans. He would not fight me the same way. He would definitely use his wrestling background to try and get me to the floor. But, dude, hats off to him. Two thumbs up. Amazing performance for Usman, for sure.”

Following his third successful title defense, Usman did something a lot of champions don’t normally do, he had a name ready to call out. The name he chose was Jorge Masvidal, the man with whom he defeated in July at UFC 251.

While there were many people who understood the champion’s request to face Masvidal, there were others—like Thompson—that weren’t big fans of it.

“For one, his last fight was [against] you, so it just doesn’t make sense to fight him again,” Thompson said. “He clearly lost. I know it was short notice, but I just think that Kamaru Usman knows. It’s smart for him, he knows he can beat him for a high pay, it’s a big name, there is beef there so it makes sense on his part. As a fan and as a fighter, and as someone who has been at the top of the game and trying to get title fights, it doesn’t make sense for that to happen.

“Fight somebody you haven’t fought yet. You beat pretty much everybody except me in the top-five. That’s it. Of course, you’ve got Michael Chiesa who is No. 6, he hasn’t fought Michael Chiesa either. But keep on going down the line. You beat everyone up here, who’s next? It’s this guy.

“C’mon Usman! C’mon, man. Fight somebody you haven’t fought yet.”

It seemed as if the UFC was heading in the direction of booking the rematch between Usman and Masvidal, even the possibility of having them coach against each other on the return of The Ultimate Fighter.

However, late last week, Usman looked to have changed his tune as he stated on Twitter, which was something that certainly got Thompson’s attention.

“It was super cool to actually see Usman say that anybody can get it,” Thompson explained. “That leads me to believe that I have a possibility to make this thing happen.

“If the fans love it, the UFC likes to get behind it. As of right now, I see a lot of people saying I should get the next title shot, that I should be next for Usman. But you never know, so I’m staying in shape, I’m working out, gotta get this hand checked out and hopefully we can make this thing happen. I think it would be an awesome fight and Usman even said that his toughest fight would be with someone like me where it would be hard to prepare for, a difficult read, I’m the third best in the division with takedown defense so I think it would be a fun fight.

“And that’s why I want it because it would be a great fight. Obviously it would be great to fight for the title again, but I like Usman. I think he’s a great guy, good champion and it’s the time to really test my ability at that level who is the best.”

At this point in Thompson’s career, he may only get one more opportunity to fight for UFC gold. He was the challenger for Tyron Woodley’s first two title defenses at UFC 205—where they fought to a majority draw in one of the best fights of 2016—and UFC 209, where Woodley won a majority decision.

After that, the South Carolina native defeated Masvidal at UFC 217 in November 2017 via unanimous decision. Thompson would go on to lose a controversial decision to Darren Till six months later, and was brutally knocked out by a superman punch from Anthony Pettis in March 2019.

Thompson has been working to build his way back up with victories over Neal and Vicente Luque and is planning on making the most of, what could potentially be, his last chance to become champion. Should it happen at this stage of life and career, Thompson admits it would have significantly more meaning than it would have in 2016.

“It would mean more than anything, and I don’t mean just for me,” Thompson stated. “[It would be for] everybody that helped get me here; my coaches, especially my dad. My dad has been with me since day one and he talks about that title every day, as if he’s the one fighting for it. I think, in some ways, he’s trying to live through me a little bit. He knows the drive, he knows the hard work, the sacrifices I’ve made to get to where I’m at and he made those as well.

“To win that fight, for me, for him, would mean the world. Going through the injuries, the adversity, working my way back up from the last fight with Woodley, going down to No. 9, it’s been hard work, a long road for sure. Winning it this year, getting that title belt would mean the world to me. It would be amazing.”