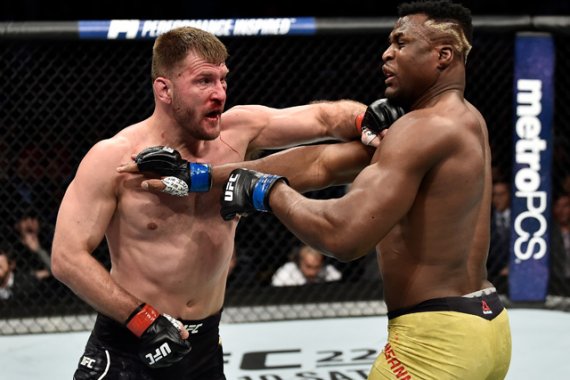 Stipe
Miocic and Francis
Ngannou will square off for a second time with heavyweight gold
on the line at UFC
260.

UFC president Dana White confirmed the pairing during the UFC on
ABC 1 post-fight press conference on Saturday. UFC 260 takes place
on March 27 at an as yet to be announced location and will see
Alexander
Volkanovski defend his featherweight crown against Brian
Ortega in the co-main event.

Miocic earned a convincing five-round verdict against Ngannou
during his first title reign at UFC 220 in January 2018. The
Ohio-based firefighter then went 2-1 in a trilogy with Daniel
Cormier, concluding that rivalry with a decision win at UFC 252
this past August. Miocic has won eight of his last nine UFC bouts
overall.

Ngannou is currently on a four-bout winning streak in which he has
finished all four of his foes inside of a round. Most recently,
“The Predator” knocked out Jairzinho
Rozenstruik in 20 seconds at UFC 249 in May 2020.