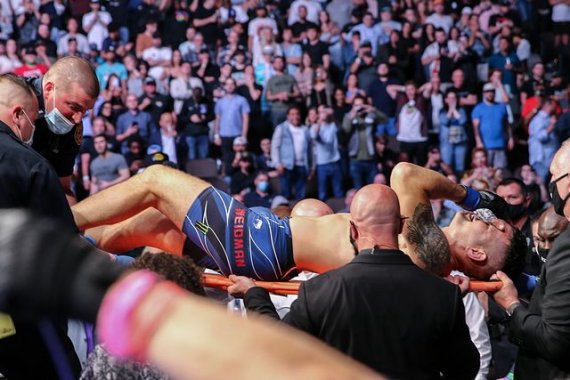 As expected, Chris
Weidman is facing a lengthy time on the shelf after the
unfortunate events that transpired at UFC
261.

Weidman has been suspended six months and requires clearance from
an orthodpedic doctor after breaking his leg on a low kick checked
by Uriah
Hall in their bout on April 24 at Vystar Veterans Memorial
Arena in Jacksonville, Fla. The Florida State Boxing Commission
released medical suspensions from the event to
mixedmartialarts.com.

Weidman’s recovery likely will be longer than that, as the fighter
revealed that it could be up to a year before he resumes training
after having a rod inserted into his leg during post-fight
surgery.

Five other fighters from UFC 261 are facing potential six-month
terms (The Florida Commission did not release specific injuries for
the majority of the card’s participants): Dwight
Grant, Pat
Sabatini, Rodrigo
Vargas, Zhu Rong and
Na
Liang. Additionally, Karl
Roberson is suspended indefinitely and must provide a negative
MRI or he will be sidelined six months.