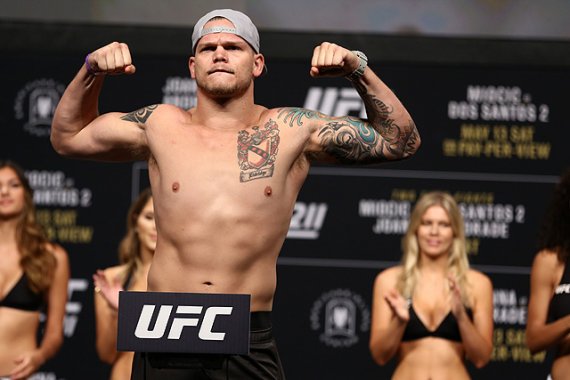 UFC heavyweight Chase
Sherman has been suspended for nine months for an anti-doping
violation related to an in-competition sample collected on May 13,
USADA announced Tuesday.

Sherman tested positive for anastrozole during a drug test at UFC
Fight Night 171. Anastrozole is in the class of hormone and
metabolic modulators and is banned at all times, according to the
UFC Anti-Doping Policy.

Sherman provided evidence that he used the banned substance prior
to entering the UFC Anti-Doping program, but he still faces a
violation because he did not declare anastrozole on his onboarding
declaration form. Sherman received a reduced sanction by providing
full and complete cooperation with USADA, meaning he provided
evidence that he did not intend to enhance his performance by using
the substance and was honest and prompt regarding all requests for
information.

“The Vanilla Gorilla” returned to the Octagon for the first time
since 2018 at UFC Fight Night 171, where he defeated Isaac
Villanueva via second-round technical knockout. Sherman is
still subject to punishment from the Florida State Boxing
Commission, which oversaw the event, so it is currently unclear if
the victory will stand. Sherman went 2-5 during a previous UFC
stint from 2016 to 2018 but collected three wins under the Island
Fights banner before defeating Villaneuva.

The USADA statement regarding Sherman is as follows:

USADA announced today that Chase
Sherman, of Gulfport, Miss., has accepted a nine-month sanction
for a violation of the UFC® Anti-Doping Policy.

Sherman, 30, tested positive for anastrozole as the result of a
sample collected in-competition at UFC Fight Night on May 13, 2020.
Anastrozole is a Specified Substance in the class of Hormone and
Metabolic Modulators and is prohibited at all times under the UFC
Anti-Doping Policy and UFC Prohibited List.

Upon being added to the UFC Anti-Doping Program, an athlete who
voluntarily and promptly discloses the use of a prohibited
substance prior to testing will not be deemed to have committed a
violation if they test positive from the prior use. While Sherman
provided sufficient evidence that his use of anastrozole occurred
prior to entering the program, he did not declare anastrozole on
his onboarding declaration form and therefore he faces a violation
for the presence of the substance in his sample.

Sherman received an additional reduction to the period of
ineligibility for his Full and Complete Cooperation. Under the
revised UFC ADP announced on November 25, 2019, a Full and Complete
Cooperation reduction may be granted in the event that an athlete
demonstrates that they did not intend to enhance their performance
and provided full, prompt, and truthful responses and information
to all reasonable inquiries and requests for information.

Sherman’s nine-month period of ineligibility began on May 13, 2020,
the date his positive sample was collected.

Sherman’s positive test also falls under the jurisdiction of the
Florida State Boxing Commission, which is resolving the case in
accordance with its rules.