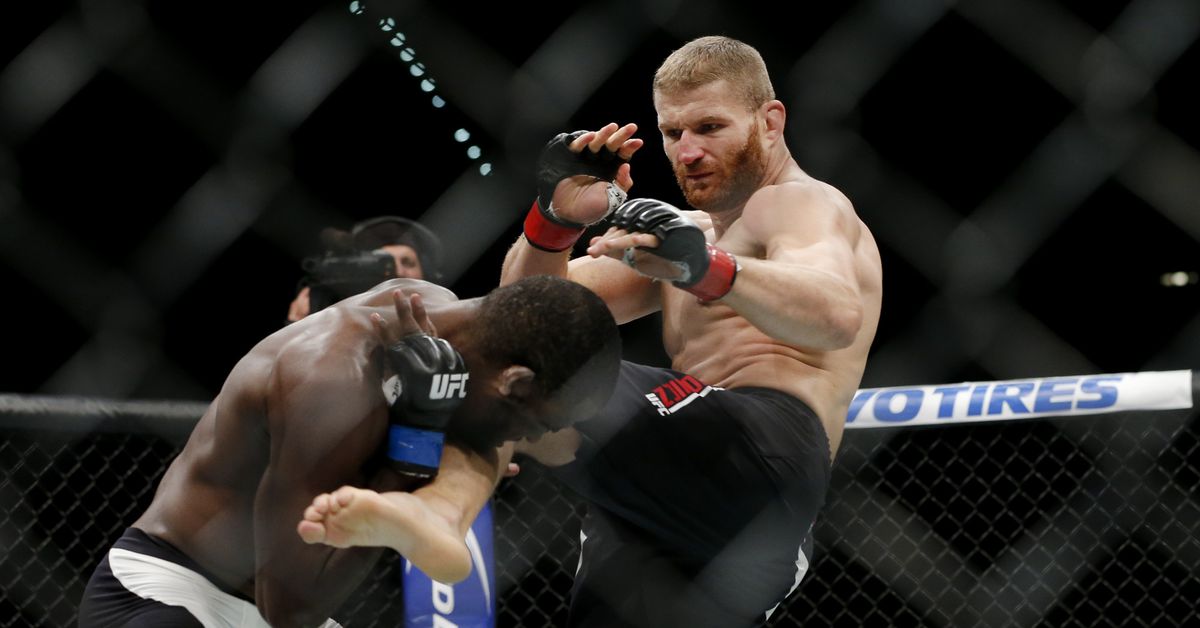 Fans might not be clamoring for it, but after UFC Rio Rancho it could be Corey Anderson or Jan Blachowicz that is next to face Jon Jones.

Anderson has been hunting Jones for sometime, confronting him both publicly and on social media and stringing together a series of wins in a competitive light heavyweight division. Blachowicz was on his way to a title shot before having that taken away by Thiago Santos, and now he hopes to do the same to Anderson in their rematch Saturday.

The first meeting back in September 2015 was all Anderson, and if he puts on a repeat performance, he may give Jones a reason to stay at 205 pounds; that, or Blachowicz puts himself into position to celebrate his 13th year of competition with his first UFC title shot.

Whatever drama unfolds in the main event may pale in comparison to the sheer madness that is likely to occur when co-headliners Diego Sanchez and Michel Pereira face off. Sanchez has been unwavering in his intensity since the first day he stepped into The Ultimate Fighter house, while “Demolidor” brings his own unpredictable energy to the cage that manifests itself in a series of athletic and showy—and yes, often nonsensical—aerial maneuvers.

Whether you love or hate Pereira’s act, you won’t want to miss his collision with Sanchez.

In other main card action, flyweight contender Montana De La Rosa looks to rebound from her first UFC loss when she takes on Mara Romero Borella, lightweight prospects Brok Weaver and Kazula Vargas hunt for a highlight, Rogerio Bontorin faces Ray Borg in a 128-pound catchweight bout after Borg again missed weight, and Lando Vannata and Yancy Medeiros meet in what should be an entertaining lightweight tilt.

When: Saturday, Feb. 15. The entire event will air on ESPN+, with the seven-fight preliminaries starting at 5 p.m. ET, and the six-fight main card starting at 8 p.m. ET on ESPN+.

You hate to say that a rematch is going to go exactly like the first fight, but Corey Anderson had Jan Blachowicz’s number in their first meeting and this second go-around shouldn’t be any different.

Anderson’s takedowns are a looming threat that change the whole complexion of his fights. Blachowicz is a hard worker when it comes to takedown defense, but there’s only so much you can do against a guy like Anderson who is both relentless and a technically-sound wrestler. Look at any of Blachowicz’s losses and you’ll see the majority of them were spent with him on his back.

If Blachowicz wants to have a chance, he’ll have to establish his jab early and change levels to keep Anderson guessing. His footwork has to be on point and he has to avoid damage even if he gets taken down early. It’s a lot to ask for.

While Blachowicz will have two more rounds than last time to possibly land a knockout punch, it’s more likely it will just be 10 more minutes of ground-and-pound punishment for him.

Let’s make one thing perfectly clear here, what I’m about to write is not an indictment of Michel Pereira’s fighting style. Pereira is a beautiful butterfly who, frankly, is too good to be bound by any man-made cage or ring or YAMMA pit. If you hate Pereira, what that means is you hate fun (or you hate fighters who miss weight, and if that’s the case, I have no argument). “Demolidor” rules.

Diego Sanchez is going to beat him though.

This is a bad matchup for Pereira, whose longstanding cardio issues were exposed in his last fight with Tristan Connelly. He has to finish early or at least build up an insurmountable lead through the first two rounds, otherwise he’s pooched. Fortunately for Pereira, Sanchez is no longer the impervious spirit of vengeance he once was. However, he is still a relentless dog of a man and he’s going to sink his teeth into Pereira the first chance he gets.

I can see Diego wading right into one of Pereira’s flashy, flippy strikes and just getting himself brained, but I can just as easily see him taking Pereira’s best shots and then wrestling him to the ground. Pereira is not equipped to deal with Sanchez down there and he’s going to get handled en route to losing another decision.

This could be a fun fight, with two strong grapplers in Montana De La Rosa and Mara Romero Borella that are also willing stand-up fighters.

De La Rosa has shown more versatility in her four Octagon outings and also a more aggressive submission game on the ground, so I’m leaning for her to have the advantage on the scorecards should this one go the distance. However, I’m thinking this one ends before the third round and that it’s De La Rosa who earns a tap-out.

Borella has good takedowns and ground-and-pound, so if De La Rosa gets too cute fighting from bottom position, she could be in trouble. Whichever woman can consistently be first as far as initiating the grappling will take the W. There’s no room for timidity here.

It should be De La Rosa who’s quicker out of the gate on Saturday.

Brok Weaver brings a ton of toughness and determination to this matchup, plus some sharp hands. He impressed in his Contender Series appearance with a patience that belied the fiery persona he brings into the cage. His style isn’t pretty, but he has the basic tools needed to be competitive at 155 pounds.

Unfortunately for Kazula Vargas, he didn’t get to show the exciting striking that landed him on the UFC’s radar in his debut for the promotion as he was taken down and out-grappled by Alex da Silva. His submission defense was encouraging even if his offense was essentially non-existent. He’s creative on the feet, he just needs to show that he’s capable of executing a game plan.

On the other hand, given Weaver’s inclination to strike, this could quickly break down into a brawl and in that case, we’re entering coin-flip territory as neither man is likely to give an inch. I give the edge to Weaver for the fight IQ he’s shown in the past and a slight reach advantage that could make the difference once they start trading in the pocket.

It’s a small sample, but Ray Borg’s, er, lax observation of weight class distinctions has benefited him in his UFC career as he’s 2-1 in fights where he’s missed weight. Both of those wins came in bouts that were scheduled for flyweight.

He came in heavy again for this fight with Rogerio Bontorin, which doesn’t necessarily guarantee he’ll have a size advantage on Saturday or that his weight cut was less taxing than Bontorin’s. It certainly can’t hurt Borg though, especially when you consider that Bontorin told MMA Fighting he’s been fasting since Monday to make weight.

Bontorin is 16-1 in his career so far, 2-0 in the UFC, so whatever he’s been doing during his fight weeks it’s worked for him so far. He has deadly jiu-jitsu and will put Borg’s submission defense to the test. Borg has only been submitted once (cue up Demetrious Johnson highlight reel), a testament to him typically finding ways to achieve top control whether it’s via a takedown or after a spirited scramble.

It’s a shame that weight-cutting has cast a shadow over this matchup because Bontorin looks like a future title challenger and Borg has already been one. I view wrestling as a more reliable discipline to fall back on should neither man be at 100 percent on fight night and that means Borg wins this one on the scorecards.

In the midst of a 1-3-2 stretch, Lando Vannata is as difficult a fighter to predict as anyone. Since the first day he landed in the UFC, he’s bounced between looking like a world beater to a prospect who’s maddening inconsistency may forever doom him to a life spent in the middle of the pack. There will be no excuses for “Groovy” when he takes on Yancy Medeiros, a veteran that is always looking to engage.

Medeiros’s length and pressure can be tough to navigate, but so can Vannata’s unpredictable striking style. Vannata will throw kicks from any angle and if Medeiros lets Vannata get into any sort of rhythm, he’s toast. He may want to mix in some wrestling, a tricky proposition given Vannata’s sneaky ground game.

Most likely, as soon as these two lock eyes in the cage, they will make a silent agreement to throw down in pursuit of a $50,000 bonus. It’s been over three years since Vannata scored his lone UFC knockout and I see him netting a second against Medeiros.