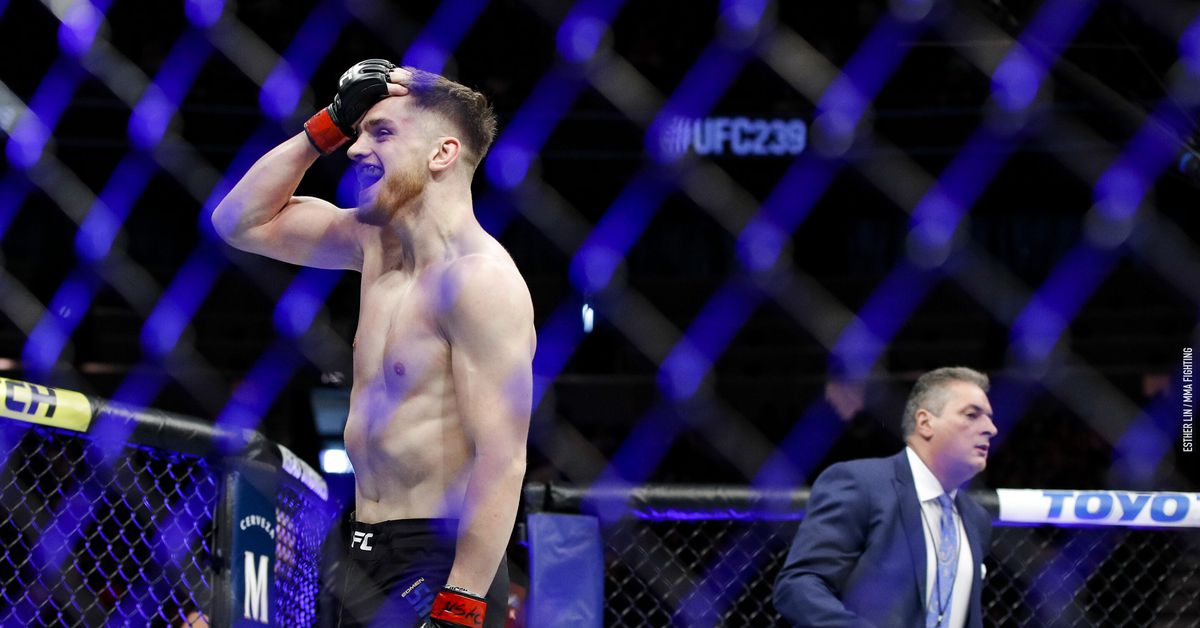 Edmen Shahbazyan is ready for his close-up.

Just 22 years old, Shahbazyan has been positioned at the front and center of all of the UFC’s promotional efforts for its return to UFC APEX in Las Vegas on Saturday. UFC Vegas 5 main event counterpart Derek Brunson is a respected opponent, but all the buzz around Shahbazyan’s next fight has him poised to make a huge leap up the middleweight rankings with a win.

Brunson has only lost to the best of the best, meaning he’s the perfect litmus test for Shahbazyan. Is Shahbazyan a legitimate candidate to become the youngest champion in UFC history or will Brunson derail his hype train as he’s done in his past two fights against Ian Heinisch and Elias Theodorou?

In the co-main event, top flyweight contender Joanne Calderwood takes a risky fight against former Invicta FC champion Jennifer Maia. “JoJo” was lined up for a shot at Valentina Shevchenko, but with Shevchenko currently out with an injury, Calderwood decided to put up her spot in the rankings for the chance to stay busy and take on the dangerous Maia.

Where: UFC APEX in Las Vegas

When: Saturday, Aug. 1. The entire event will air on ESPN+, with the four-fight preliminaries starting at 7 p.m. ET, and the six-fight main card starting at 9 p.m. ET.

It’s a shame that this isn’t a five-round main event (the bout was originally scheduled as the co-main and later bumped to the headlining spot after Holly Holm vs. Irene Aldana was canceled when Aldana tested positive for COVID-19) because it’s important for an aspiring contender like Edmen Shahbazyan to get as much cage time as possible at this stage of his career and Derek Brunson has the capabilities to test him for 25 minutes.

Right now, the popular prediction appears to be that Shahbazyan dusts Brunson inside of a round, which makes sense given their track histories. Shahbazyan is a wicked finisher with a preternatural mix of accuracy and patience, while Brunson has been caught in the opening round several times. Look for Shahbazyan to take the center of the octagon immediately and dare Brunson to make the first move. As savvy as Brunson is, he’s also been bitten in the past for being too tentative, though his recent performance shave shown he’s still improving at picking his spots on offense while being mindful of his defense even at age 36.

Shahbazyan is also deceptively strong, which will serve him well against Brunson’s wrestling. Brunson still has a bad habit of telegraphing his shots and Shahbazyan knows how to turn stuffed takedowns into offense. It behooves Brunson not to force the action, because so far Shahbazyan hasn’t showed a significant hole in his game, which means Brunson should take his time figuring out where Shahbazyan might falter.

Brunson can go the distance with elite fighters, a category that Shahbazyan has to prove he belongs to, but he’s faltered too many times in high-profile situations to be favored.

Simple enough, and so far Jennifer Maia nailed step one, which hasn’t been a guarantee for her. After two straight misses, Maia successfully hit the flyweight mark on Friday and she couldn’t have done it a better time. She has a golden opportunity to steal Calderwood’s thunder and slip into the title picture.

That’s not to say that Maia doesn’t have the skills of a top contender. She’s a sharp striker with excellent toughness, though she tends to be somewhat predictable. Against a well-versed standup specialist like Calderwood, Maia could see her lead leg chewed up if she isn’t careful. For Calderwood, the key will be her usual mixture of volume and unassuming nastiness.

That killer instinct of Calderwood will be the difference as Maia just hasn’t shown she has an extra gear since joining the UFC. As long as Calderwood stays smart and respects Maia’s power, she should take a decision.

It’s amazing to watch how Randy Brown has developed since making his UFC debut in 2016. The 30-year-old’s constant evolution is why I’m picking him to beat Vicente Luque.

Though he’s actually two years Brown’s junior, Luque is considerably older in MMA years and it’s fair to wonder if his own development has slowed at all. He’s still one of the best finishes in the entire UFC, capable of blitzing with combinations and muscling his opponents into submission with a variety of chokes. The question is whether Brown is about to leapfrog Luque in the rankings.

Brown’s striking has become so much more fluid and he compliments that with a serviceable wrestling game. He’s also improved his range striking, a key skill that is the difference between him being a fun mid-tier fighter and a potential contender. His defense also factors into this fight as Luque is capable of dragging anyone into a dogfight, a scenario that he’s going to have the upper hand in more often than not.

I expect this fight to have plenty of back-and-forth, with Brown outlasting and finishing Luque in the third.

What a great idea to give these two 15 more minutes to work. Lando Vannata and Bobby Green’s first fight at UFC 216 was an entertaining tilt marred by Vannata losing his senses for a moment and costing himself a point with an illegal knee early in the contest. Outside of that brain fart, Vannata appeared to be the sharper striker and he’ll definitively prove that in the rematch.

Green’s usual defensive tricks just aren’t effective against an opponent with Vannata’s style. “Groovy” is adept at attacking from unorthodox angles and where other men might miss, Vannata can find the button and hit it over and over again. If he tightens up his performance even more, he could actually finish Green.

I have too much respect for Green’s game to make that call, so I’m leaning towards a Vannata decision win instead.

In a word: chaos.

As my colleague Jed Meshew so eloquently put it on Between the Links, this is the most middleweight of middleweight fights… and it’s happening at light heavyweight, which some how makes it more middleweight-y.

Ed Herman and Gerald Meerschaert have seen it all and odds are they’re just looking to throw down and have a good time on fight night. Sure, there’s more to their skill sets than that as this could easily turn into a grueling ground battle with Herman working his ground-and-pound and Meerschaert hunting for submissions. But the modern version of Herman is almost strictly a standup fighter, one that will challenge Meerschaert to keep pace in the striking department.

As long as this stays standing, I like Herman’s chances of scraping by with a hard-fought, gutsy, and occasionally ugly effort.

The unpredictable Kevin Holland doesn’t always make the most of his prodigious physical gifts, but when he’s on his game his prospects are as bright as any fighter at 185 pounds. He has a significant reach advantage over the majority of fighters in his division, including Trevin Giles.

Holland has to use his movement to prevent Giles from outmuscling him and doing damage in close. Knowing Holland, he’ll have welcome the chance to test his clinch and dirty boxing skills against Giles’, but that’s not the path to victory for him. Giles has a clean jab and the ability to generate punching power in a hurry, which makes him a threat to finish if the sturdy Holland gets careless.

This could be a wild one and Holland has shown he thrives when he has to improvise. Holland wins a close decision.