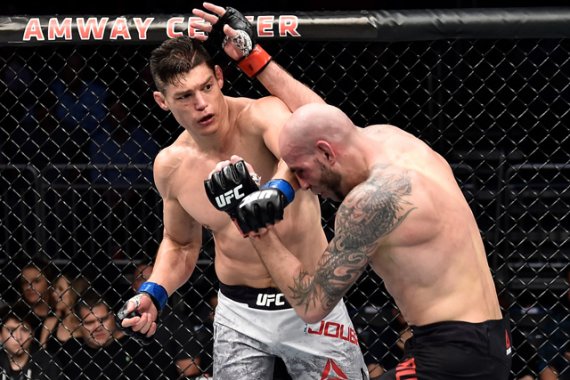 Alan
Jouban is calling it a career after 24 professional mixed
martial arts bouts.

“I’d like to officially announce my retirement from MMA,” Jouban
wrote. “Fighting and the UFC have given me everything I have today!
I would not change a single thing from my journey because I got to
live my dream and not know what was next. My coaches, my teammates,
those of you that were [a part] of this, I appreciate you so much!
Thank you to my supporters and even my opponents along the way.

“Injuries, age and life have shown me that it’s time. If I can’t
compete to my fullest, then I won’t,” he continued. “So I’ll focus
my time now on broadcasting where I can still share my passion and
knowledge for the sport with with everyone at home. Thank you to
everyone for all the love over the years. I look forward to
becoming a staple in the sport from this end now as well.”

Jouban ended his promotional tenure with victories in two of his
last three fights, including a unanimous decision triumph over
Jared
Gooden in his last outing at UFC 255 in November 2020. “Brahma”
went 8-5 during a UFC stint that began in August 2014. He posted
notable triumphs over the likes of Belal
Muhammad, Mike Perry
and Ben
Saunders. Jouban was 17-7 over the course of a pro career that
began in 2011.