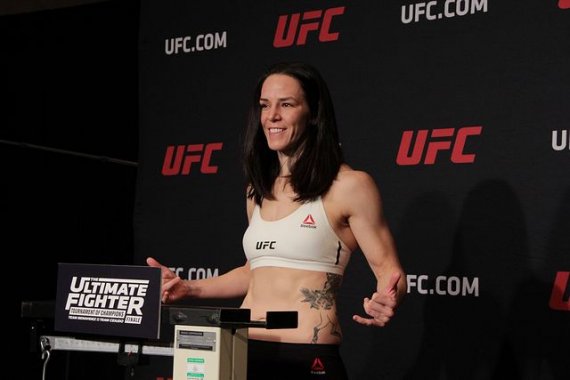 HEADKICK TO THE SUB!! @SabinaMazo
with a HUGE finish to open the show!
#UFCVegas10 pic.twitter.com/ihroyF1WvB

Sabina
Mazo will make her bantamweight debut against Alexis
Davis at a UFC card on Feb. 27.

Multiple outlets confirmed the booking following an initial report
from
Milenio. A location has not been officially announced for the
event, which will be topped by a light heavyweight scrap pitting
Dominick
Reyes against Jiri
Prochazka.

A former Legacy Fighting Alliance flyweight champion, Mazo has won
three consecutive UFC appearances after losing her debut. In her
last outing, “Colombian Queen” submitted Justine
Kish with a rear-naked choke in the third round at UFC Fight
Night 177 on Sept. 12. Mazo also owns victories over J.J. Aldrich
and Shana
Dobson within the Las Vegas-based promotion.

Davis, meanwhile, is currently mired in the first three-fight skid
of her professional tenure after dropping successive decisions
against Katlyn
Chookagian, Jennifer
Maia and Viviane
Araujo at 125 pounds. The former 135-pound title challenger
will be making her first appearance in the division since she
outpointed Cindy
Dandois at UFC Fight Night 108 in April 2017.