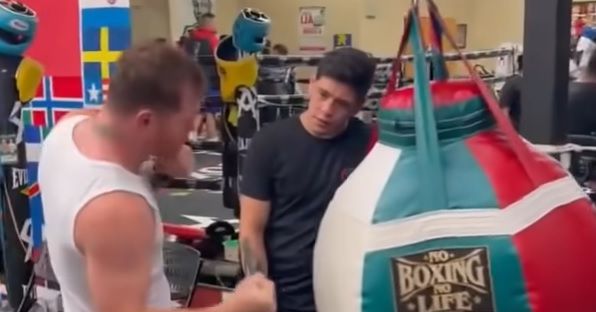 “The Assassin Baby” shared a clip of himself training with boxing megastar Canelo Alvarez and it looks like they dedicated some time to working on how to better land power punches to the body.

Watch video of the two champions meeting and working a heavy bag above (courtesy of FightHype.com).

Moreno has proven to be one of the flyweight division’s most dangerous fighters, with three submission victories and one TKO inside the octagon. That lone knockout victory came at UFC 255, when he finished Brandon Royval with a flurry of ground-and-pound after it appeared that Royval suffered a shoulder injury.

This past June at UFC 263, Moreno continued to show the improvements in his striking as he outworked Deiveson Figueiredo on the feet and on the ground before finishing with a rear-naked choke in the third to become the UFC flyweight champion.

Moreno also shared pictures of his meeting with Alvarez.