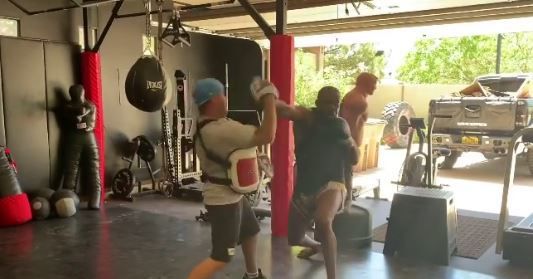 With the heavyweight title picture apparently moving on without him, Jon Jones has all the time in the world to sharpen his skills.

At the moment, the longtime light heavyweight king is focusing primarily on adding mass to his 6-foot-4 frame as he prepares to move up a division, and he admitted as much in a recent Instagram caption that accompanied footage of him sparring.

Jones warned to not mistake the footage “as my best” and that “once I actually shift my focus to doing more martial arts training it’s going to be a problem.”

Right now my training is focused around weightlifting, gaining weight and physical fitness, once I actually shift my focus to doing more martial arts it’s going to be a problem. Please don’t mistake this as my best ladies and gentlemen. Hope you enjoy.

Jones also recently shared a photo of himself with some of the other larger athletes he’s been training with to give some scope of his physical transformation and how he might physically compare to the UFC’s big men.

Current UFC heavyweight champion Francis Ngannou has made it clear that he would welcome Jones as his first challenger, but UFC President Dana White appears to be set on a rematch between Ngannou and Derrick Lewis after negotiations for an Ngannou-Jones bout resulted in a stalemate and an ongoing public spat between White and Jones.