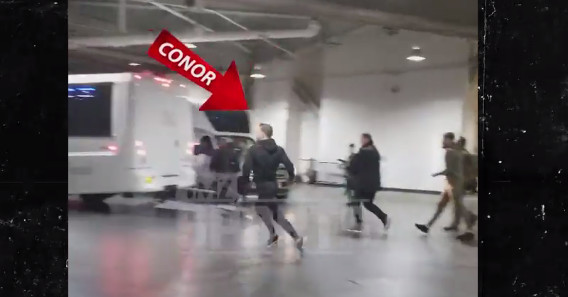 New video has emerged of Conor McGregor’s UFC 223 incident — and it isn’t pretty.

TMZ Sports posted video Thursday that shows McGregor hurling a dolly through a window of one of the fighter buses following UFC 223 media day at the Barclays Center in Brooklyn.

That video can be seen below.

McGregor and his entourage stormed the Barclays Center on Thursday afternoon and incited a melee that left several individuals shaken up and lightweight contender Michael Chiesa seeking medical attention with multiple lacerations. UFC president Dana White called the incident the “most disgusting thing that has ever happened in the history of the company” and said McGregor will be reprimanded.

A representative for the New York Police Department told MMA Fighting that although there is no outstanding warrant out for McGregor’s arrest as of Thursday afternoon, authorities are currently looking to speak to the UFC lightweight champion.

The incident comes just two days after McGregor’s teammate, Artem Lobov, was involved in a hotel altercation with UFC 223 headliner Khabib Nurmagomedov. Nurmagomedov and his team were inside the bus McGregor attacked on Thursday.