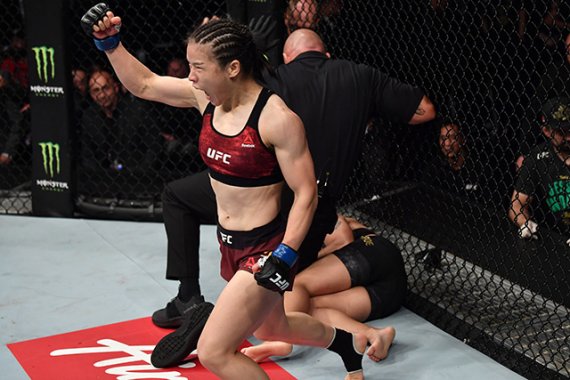 Weili Zhang is expected to make her first strawweight title defense against Joanna Jedrzejczyk at UFC 248 on March 7.

MMAFighting.com was first to report the news. Verbal agreements are in place for the bout, which is likely to be finalized soon. The promotion has not formally confirmed the pairing. UFC 248 does not currently have a location or venue.

Zhang hinted on social media last month that her first title defense would come against Jedrzejczyk. The Chinese champion has been victorious in 20 of her 21 professional outings. After winning her first three Octagon appearances, “Magnum” claimed the title with a shocking 42-second stoppage of Jessica Andrade in the UFC Fight Night 157 headliner in Shenzhen, China on Aug. 31.

Jedrzejczyk is coming off a decision win over Michelle Waterson in the UFC Fight Night 161 headliner on Oct. 12. After that victory, Jedrzejczyk said that reclaiming the strawweight championship is her “mission.” The American Top Team product won the title in March 2015 and successfully defended it five times before falling to Rose Namajunas at UFC 217. She then lost to Namajunas via decision in an immediate rematch at UFC 223 in April 2018.