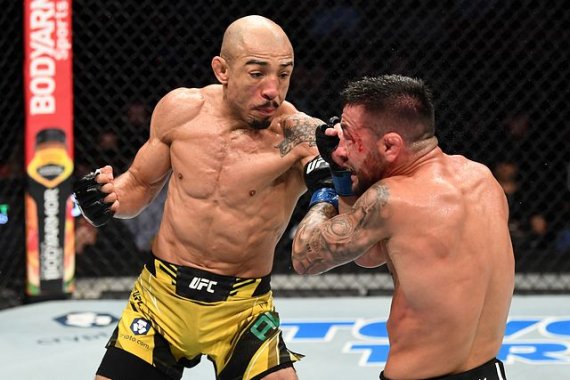 After defeating Marlon Vera
and Pedro
Munhoz via decision for a pair of key bantamweight victories,
former featherweight champion Jose Aldo will
return to the Octagon on Saturday against Rob Font, who
is on a four-bout winning streak at 135 pounds.

In an interview with Brazilian podcast Mundo da Luta, Nova Uniao
leader Andre
Pederneiras revealed that Aldo is finally comfortable in his
new weight class and is in great position to earn his third
consecutive triumph at UFC
on ESPN 31 on Dec. 4.

“Aldo is much more adapted in that division now,” Pederneiras said.
“Font deserves all respect. He has two strong points: a dangerous
jab and straight. But I see Aldo with many more weapons to finish
the fight before the fifth round.”

Pederneiras also discussed the
feud between Aldo and Khabib
Nurmagomedov, who recently seemed to downplay Aldo’s success in
a new weight class. According to Perderneiras, Khabib´s manager,
Ali Abdelaziz, talked to him via phone to clear the air.

“I received a call from Rony, who works with Ali Abidelaziz. They
were having lunch and Ali asked to talk to me,” Pederneiras said.
“He said Khabib told him he never said bad things about Aldo.
According to him, it was just a bad translation done to create
conflict. Ali guaranteed me that Khabib respects Aldo a lot and
would never say bad things about him in any interviews.”