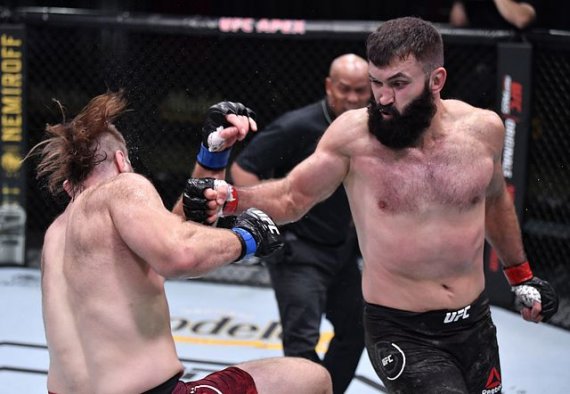 Andrei
Arlovski will step in for Parker
Porter and fight Chase
Sherman at
UFC on ESPN 22.

Fight
Bananas was first to report the change to the heavyweight
contest. UFC on ESPN 22 takes place at the UFC Apex in Las Vegas on
April 17 and is headlined by a middleweight clash between Robert
Whittaker and Kelvin
Gastelum.

Arlovski last appeared at UFC Fight Night 185, where the former
heavyweight champ was submitted by Tom
Aspinall in the second frame on Feb. 20. Prior to that, the
42-year-old Belarusian had earned back-to-back decision triumphs
against Philipe
Lins and Tanner
Boser.

Sherman will enter the matchup on a four-bout professional winning
streak. After three consecutive triumphs under the Island Fights
banner, “The Vanilla Gorilla” returned for a second stint in the
Octagon with a second-round TKO of Isaac
Villanueva at UFC Fight Night 171 in May 2020.