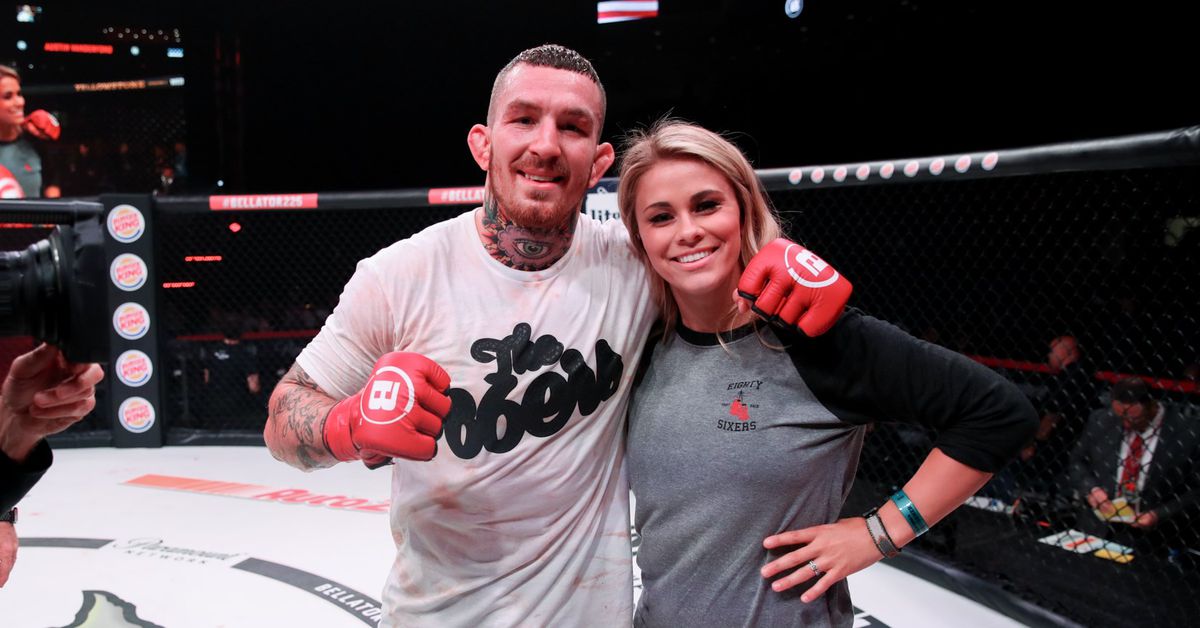 It’s one thing to compete in the world of bare-knuckle boxing. It’s another to watch your wife do it for the first time.

That’s what Austin Vanderford experienced when he saw his wife Paige VanZant make her bare knuckle debut at February’s KnuckleMania event under the BKFC banner. VanZant took on Britain Hart and was on the wrong end of a five-round unanimous decision in her first fight since parting ways with the UFC in 2020.

All in all, it was a learning experience, not just for VanZant in the ring, but for Vanderford as a husband and her No. 1 supporter.

“It honestly felt like an MMA fight,” Vanderford told MMA Fighting while appearing on What the Heck. “Of course, there’s a little more at stake with the damage and it being a new venture, and whatnot. I was extremely proud, especially her last round I thought she really turned it on and it kind of showed what she can go forward and do in the fights to come.

“More than anything, her spirit wasn’t broken. We learned from it and there was definitely a learning curve. One of the biggest advantages in bare knuckle is just the experience, going in there and doing it because it’s different than what we’ve grown accustomed to with having pads on our hands and going to bare knuckle, not really knowing if her hands were going to break. How many shots can I take before I’m completely sliced up, and all that. But I’m really confident, excited for her next fight and I was extremely proud.”

Vanderford (10-0) is getting ready for his toughest test to date in his own career when he meets Fabian Edwards at Friday night’s Bellator 259 event. “The Gentleman” has yet to taste defeat in his professional MMA career, and he’s well aware that a win over Edwards puts him in a great position in the Bellator middleweight title picture.

The pride Vanderford shares toward his wife is easy to see. Although the result wasn’t what they had hoped for, he believes VanZant learned a lot of valuable lessons in her bout – and he was able to breathe a little easier in the aftermath.

“Of course we were both bummed out [about the loss],” Vanderford said. “It felt like it was a fight she could win but going into it, Britain had the experience over her—I think it was her fourth or fifth fight—and it just was a big eye-opener. Even just the round lengths being so short, and just knowing how much we could put on the gas pedal from the opening minutes to the rest of the fight.

“But it was kind of hard to watch, for sure.”

While an official date has yet to be announced, sources previously confirmed to MMA Fighting that BKFC is targeting a matchup in June or July between “12 Gauge” and promotional newcomer, and former octagon opponent Rachael Ostovich. VanZant submitted Ostovich in the second round of their UFC on ESPN+ 1 matchup in January 2019.

With her first bare-knuckle bout behind her, Vanderford said VanZant didn’t lick her wounds for very long and was ready to get right back in there as quickly as possible.

“She’s a fighter, man,” Vanderford explained. “She’s tough, despite what a lot of people think. She’s tough, and that’s the biggest thing. She’s ready to get back after it, and she’s excited for the next fight for sure.”