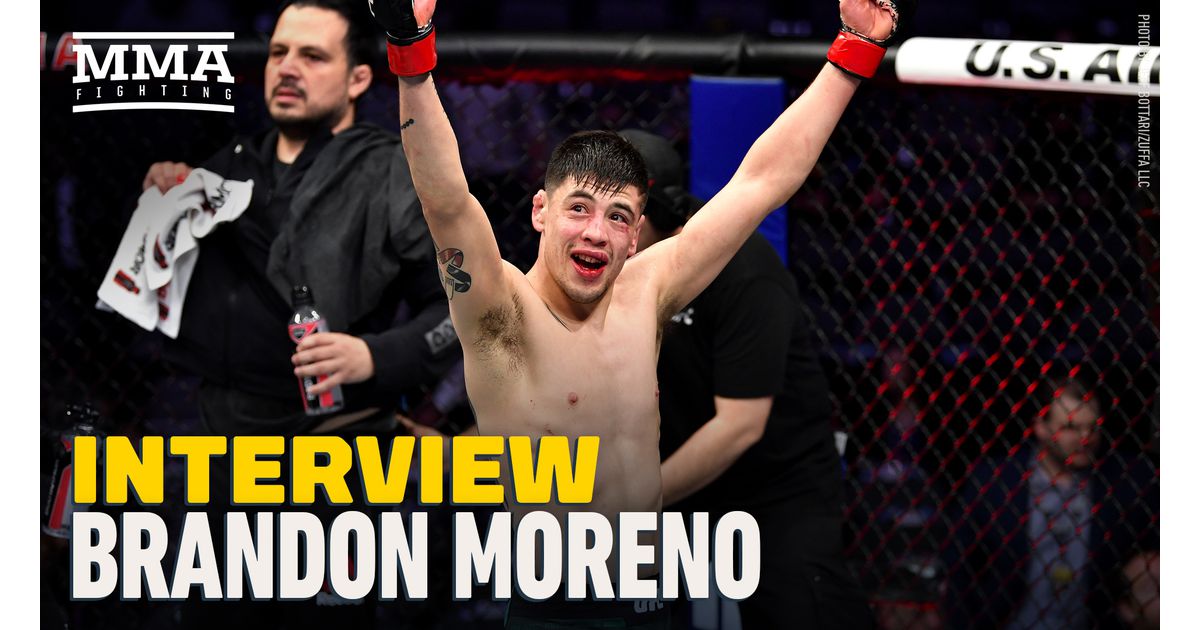 Brandon Moreno is admittedly frustrated with what has gone on with the flyweight title picture but is well-aware he needs to stay focused on his upcoming fight on the UFC’s next PPV event.

Moreno will face the surging Brandon Royval at UFC 255 in a pivotal night for the 125-pound division. The event takes place Nov. 21 at the UFC APEX in Las Vegas and will be headlined by a championship bout between Deiveson Figueiredo and Alex Perez.

Initially, the title shot went to former 135-pound champ Cody Garbrandt before an injury forced him to withdraw. Perez, who was originally scheduled to face Moreno at the event, was moved up to the main event to fight Figueiredo.

While Moreno understood Garbrandt jumping the line from a business perspective, Perez getting the shot as his replacement left him scratching his head.

“It was a sad moment but I could understand it because Cody Garbrandt has a name and he’s a former champion,” Moreno told MMA Fighting while appearing on What the Heck. “He can sell more PPV’s than me or Alex can so I understood that decision.

“This moment is different. I can’t understand this decision to put Alex Perez [in the title fight.] The company must think he deserves a title shot.”

With being skipped over twice for a chance to become a world champion, the normally soft spoken, yet energetic Moreno was unhappy to say the least.

“Alex fought a lot of guys who were out of the top-15. I don’t know, I feel bad. Right now, I feel focused but when my manager called me to tell me all of this stuff, I didn’t get it. I felt like I didn’t even have the opportunity to say anything.”

Since returning to the UFC after a brief stint with LFA—a fourth-round TKO win over Maikel Perez to capture the promotion’s flyweight title—in September 2019, Moreno is unbeaten in his three octagon appearances. He fought Askar Askarov to a draw in a fight many believe Moreno should’ve gotten the decision win. “The Assassin Baby” would go on to earn back-to-back decision wins over Kai Kara-France and Jussier Formiga.

Now that time has settled to adjust to how thing played out, is Moreno okay with it?

“No, to be honest, but I know I need to keep my mind clean because this fight with Brandon Royval is very tough,” Moreno explained. “He’s a very tough opponent, his jiu-jitsu is amazing, he’s very brave and he doesn’t care what he has to do against the other fighters. He’s just trying to win fights and that’s very dangerous for me.

“He has nothing to lose. He’s No. 6 in the ranking, I’m No. 2. I need to win this fight and give something to the people who believe that I should be next for the title.”

In a year of chaos, along with a global pandemic, Moreno was asked if he has to prepare for just Royval, or if he needs to focus time and attention towards Figueiredo and Perez in case something happens to force additional changes.

Perhaps jokingly, sprinkled in with a bit of seriousness, Moreno would prefer to defeat Moreno and stay in the octagon to await the challenger and champion to run the proverbial gauntlet to answer all questions needed.

“I’m f*cking prepared for everything,” Moreno stated. “I’m ready for every guy. Actually, they can go to the octagon that night and I can fight against all of them in the same night.

“I can just stay there in the octagon [after my fight] and just wait for both guys and I’ll [go on to] fight Alex and Figueiredo in the same night. I’m Mexican and we’re born to make history.”

Moreno admits that his fight with Perez was a bigger matchup for him based on styles and the current 125-pound rankings, but knows he has his hands full with a fellow former LFA champion in Royval.

“Raw Dawg” has burst onto the scene in a huge way in 2020 with back-to-back submission wins over Tim Elliott and, most recently, Kara-France at UFC 253 in September.

From an x’s and o’s perspective, the 28-year-old Moreno—who just welcomed another daughter into the world recently—feels that Royval’s style can leave openings for a lot of new tricks he has up his sleeve.

“I think the style of Brandon Royval is perfect for me,” Moreno said. “He tries to go forward and push the fight. My last fight against Formiga, our styles were too different and I couldn’t show all my stuff. With Brandon, he’s different. With his style, I can show all of my skills: my striking, my jiu-jitsu, and I know his is really good, but I have 10 submissions in my career. He needs to be careful, too.”

With the flyweight division taking front and center, Moreno wants to make a statement at UFC 255 to the point where Garbrandt’s chance to become a two-division champion in the UFC will have to wait.

“I will win the fight and I will earn the next fight for the title,” Moreno stated. “I will go on to change the life of my family, not just my family, but all of my country. I will be the first fighter from my country to be world champion in the UFC and that would be a special moment.

“I’m ready for this fight. I know Brandon Royval will be ready, but I’m a crazy dog right now. I’m different and right now, I’m starting to feel weird.”