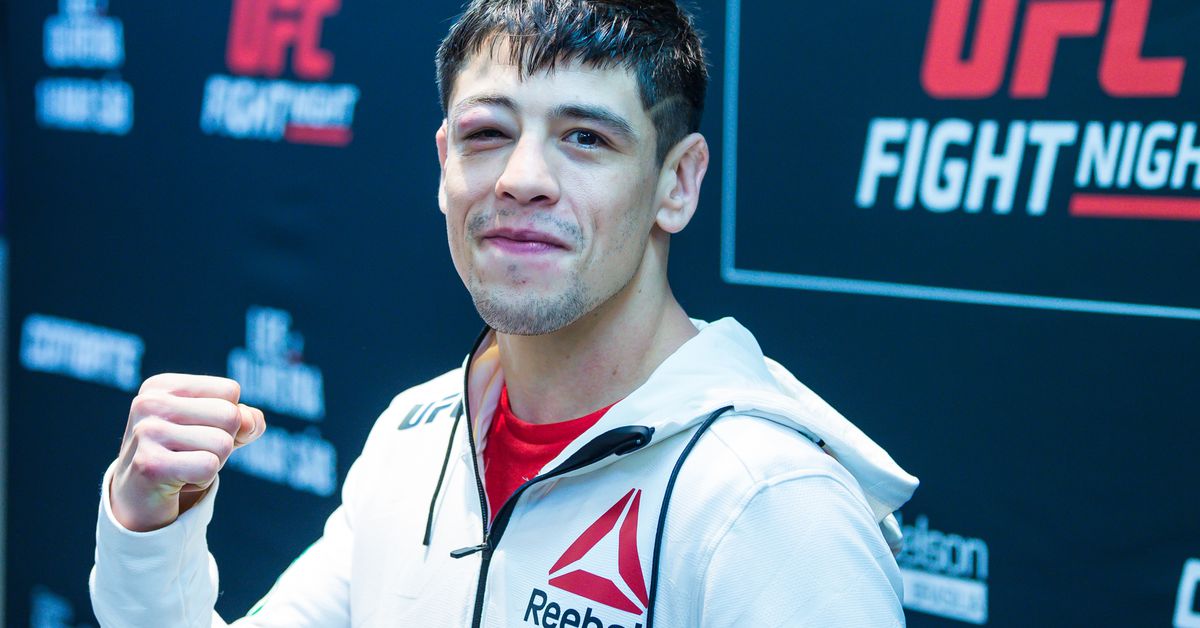 Don’t let your eyes fool you – you only thought you saw Brandon Moreno fight in Brazil.

Sure, the fighter who stepped into the cage to fight Jussier Formiga at UFC Brasilia looked distinctly familiar. There was the “McLovin” hair cut, but gone was the boyish smile. The guy who walked to the cage mean-mugged, looking to all the world like a top contender in the flyweight division.

Three rounds and three favorable scorecards later, there was no question that Moreno was a new man. Or to be more accurate, Brandon Moreno 2.0.

That’s how the 26-year-old Mexican fighter described himself afterward, almost as if he was having an out-of-body experience when his walkout music hit. He’s won back-to-back decisions now against Formiga and Kai Kara-France. Whoever this new guy is, he’s looking like a serious threat to challenge for UFC gold.

“It’s a crazy situation, because now in this new era in the UFC, Brandon Moreno never goes to the cage,” Moreno said in a recent interview with MMA Fighting. “It’s another guy. That guy is crazy. That guy is disrespectful. That guy has all the attitude to want to win the battle. That guy, he’s really strong.

“And me, [before] I’m trying to be humble, very happy, very respectful with the people. But the other guy, that guy is crazy.”

Moreno insists he still enjoys himself in the cage. He’s just not as outwardly expressive as he was when he made his UFC debut in 2016. After making a quick exit from “The Ultimate Fighter 24” tournament, Moreno actually jumped the line and debuted ahead of his fellow reality show contestants by taking a short-notice fight with Louis Smolka. “The Assassin Baby” scored a massive upset, defeating Smolka by first-round submission, and followed that with wins over Ryan Benoit and Dustin Ortiz.

Like any young fighter, Moreno had experience with setbacks, dropping a decision in his native country to Sergio Pettis and then taking another loss at the hands of his TUF 24 foil Alexandre Pantoja. Moreno was released, but it didn’t take long for him to return to the UFC; he turned a Legacy Fighting Alliance championship win into a second shot at the big show.

In his first fight back, Moreno fought Askar Askarov to a split draw, a bittersweet outcome that he feels motivated him in the long run.

“That moment was so disappointing for me, because I know it was a close fight, but even in a close fight I think some fights it’s easy to watch who won the matchup,” Moreno said. “I think it was a close fight, but I feel like I won the fight. It was hard, but everyone was really happy with my performance that night. The company, the UFC, the matchmakers, every single person that watched that night was really happy with my performance. I think that helped me to take the next step to the next fight.”

The Askarov fight may have marked the end of the original Brandon Moreno. Now, he talks about the man who shows up on fight night like Bruce Banner talks about The Incredible Hulk.

“I have a good relationship with the other guy,” Moreno said. “Just, when the moment is necessary, the other guy goes to the fight.”

As for whom Moreno plans to sic his alter ego on next, he has his eyes firmly set on Deiveson Figueiredo. Not only is Figueiredo arguably the top flyweight in the UFC today – despite his status muddled by his failure to make weight for his recent title fight – but his KO of Joseph Benavidez hit close to home for Moreno.

Moreno and Benavidez formed a bond on TUF when Benavidez acted as Moreno’s coach on the show, and the two reconnected ahead of UFC 248. Having beaten Formiga twice, Benavidez’s counsel gave Moreno a boost heading into his own fight with the Brazilian jiu-jitsu ace.

When other options are brought up to Moreno, he’s interested in avenging his previous losses to Pantoja. But his priority is winning the flyweight title, ideally in a matchup with Figueiredo.

Like most fighters, Moreno will have to wait and see what happens with the UFC’s event schedule as it remains in flux due to concerns regarding the coronavirus. He already knows firsthand how much the pandemic has affected the world being one of the 24 fighters to compete in an empty arena in Brasilia.

He’s grateful that the spoils of his victory over Formiga should sustain him until the matchmakers come calling.

“Now, because I don’t know when is my next fight, I need to keep calm, be smart, take care of all my injuries and stay strong and ready for my next fight. I’ll be ready for Dana White, for the company.”