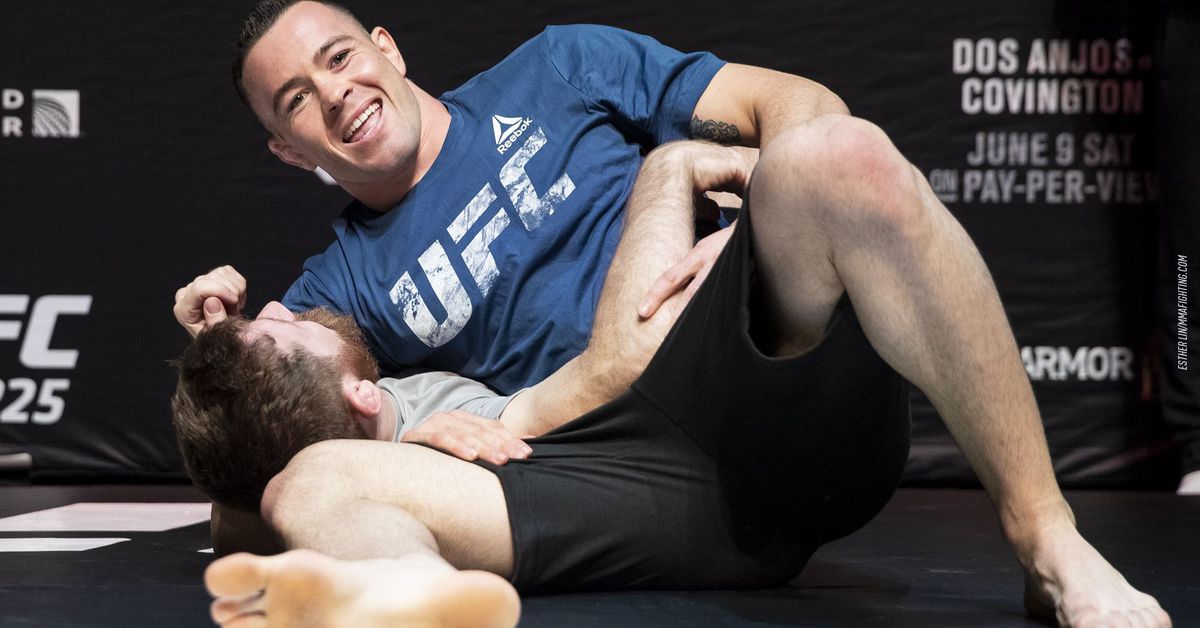 Should Colby Covington make the move to pro wrestling, he’s targeting one of its biggest stars.

In April, Covington teased that a move to the WWE could take place as early as next year, vowing to “make wrestling real again” and bring his brand of showmanship to the wrestling company. Current WWE Champion Drew McIntyre caught wind of Covington’s comments and he welcomed “Chaos,” suggesting that they meet in an unsanctioned match.

“If he wants this unsanctioned fight outside of WWE, I’m willing to fight him in a bar or something,” McIntyre told ESPN. “There’s a reason there’s different weight classes [in MMA]. I’m about 100 pounds heavier than the guy, I’m a foot taller than the guy. I’m willing to have an actual fight with him if he wants an unsanctioned fight. It’ll put more eyes on the product, perfectly happy with me.

“I’ll smash his head in, I’ll shut him up. I’ll break his jaw like [Kamaru] Usman did, and then more people watch WWE. So, Colby, I’ll fight you. No title shot though, that’s reserved for the WWE superstars.”

Covington, in turn, took another swipe at McIntyre on What the Heck, warning everyone involved that they’re responsible for what he might do to McIntyre in a match.

“Last time I was on here, we were talking about Drew McIntyre,” Covington said to What the Heck host Mike Heck. “You signed a man’s death certificate. Now you’re gonna have to get Drew McIntyre’s blood on your hands. Because now he’s talking all crazy out there like he wants to fight in an unsanctioned fight. I’m not afraid of a fight, I love to fight.

“The world is a strange place right now. Usually, I can fight anybody whenever I want, just ask Dana White. But the world’s a strange place, so I’m having a hard time fighting Drew McIntyre, [but] I’m gonna fight him soon.”

McIntyre is a star in pro wrestling. But matches with predetermined outcomes and sports entertainment isn’t new to Covington. He had a very brief run with Impact Wrestling in 2017 as part of a storyline featuring American Top Team owner Dan Lambert (who’s a huge pro wrestling fan), and the brash persona he’s emphasized as he’s ascended the UFC welterweight ranks is straight out of the pro wrestling playbook.

Because of his MMA credentials and willingness to stir the pot, Covington sees himself as a perfect foil for McIntyre and anyone else in the WWE that wants to step into the ring. At the moment, he’s leaving any negotiations with the WWE to his management, as he still has his sights set on potential fights with rivals Kamaru Usman and Jorge Masvidal.

“I’m not surprised,” Covington said of McIntyre acknowledging his callout. “He sees the way I draw. I’m the king of the UFC right now. I’m the most controversial and talked-about fighter. Everybody can’t keep my name out of their mouth. I’m living rent-free in every fighter’s head. Everybody talks about me and everybody wants to be me. The thing with the WWE is everybody thinks that I’m just gonna leave the UFC and go to the WWE. No, I can do both at the same time. I’m still young, I’m 32 years young, I’m not even in my prime yet. I’m still getting better every single day, stronger every day, better cardio, and everybody knows how good my cardio is. They call me ‘The Cardio King’ for a reason.

“So I want to do both at the same time. I want to go whoop Drew McIntyre’s ass in an unsanctioned fight, maybe over in Saudi Arabia, maybe in his home country of Scotland. And I want to go whoop ‘Marty Fakenewsman’’s ass and ‘Street Judas’ Masvidal’s ass, and nothing’s changing. It’s gonna happen.”

After a clip from Covington’s interview hit Twitter, the WWE champion responded.