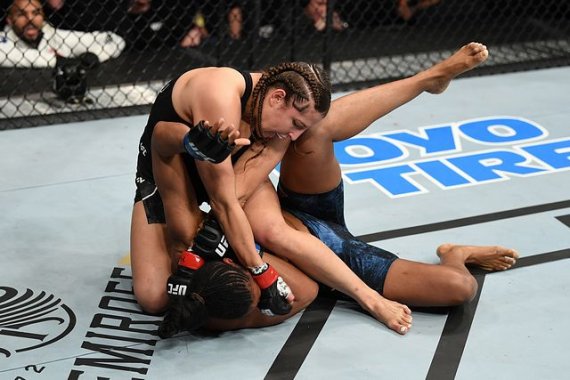 As the Ultimate Fighting Championship scrambles to put together a card and find a venue for UFC 249, the rest of the promotion’s schedule remains very much in limbo during the ongoing coronavirus pandemic.

That includes UFC 250, which is headlined by a women’s featherweight title clash between reigning champion Amanda Nunes and Felicia Spencer. At this point, UFC president Dana White seems determined to move forward with some type of normal event itinerary after April 18, though that could prove challenging as numbers rise in the reported cases of COVID-19 all over the globe.

For now, Spencer will continue to prepare like she’s getting her title shot until it is confirmed that her date with Nunes has been canceled or postponed.

“I’m still 100 percent ready to fight on May 9,” she told UFC.com. “I haven’t heard anything different, so I’m gonna just assume until that point that it’s all going through. I don’t want to take a step back in training and not give myself 100 percent and show up on that fight day knowing that I didn’t do everything I could. So I’m still giving it 100 percent.”

Spencer is coming off a first-round technical knockout victory over Zarah Fairn dos Santos at UFC Fight Night 169 on Feb. 29. The event featured a featherweight contender’s tournament of sorts, as Megan Anderson dispatched Norma Dumont Viana via first-round KO on the same card. Ultimately it was Spencer, who already owns a victory over Anderson in UFC competition, who got the nod to challenge Nunes.

“I was pretty confident going into the week and coming out of that night that I would get the first opportunity to take that fight,” she said. “There was a lot of talk and everything, and I just take that in stride. For me, I don’t really worry about things that aren’t in my control, and I try to make an effort to not let that kind of stuff stress me out or anything. I felt like I would get that call and it all worked out, but if it didn’t, I would understand and I would just have to deal with whatever came.”

The win over dos Santos was a nice bounce-back performance for Spencer, who was coming her first career defeat at the hands of Cristiane Justino at UFC 240 last July. A former Invicta FC titlist, Spencer is focused on next goal: dethroning Nunes, a champion regarded by many as the greatest female mixed martial artist of all-time.

“I’m really grounded, and with everything that I have going on in my life, I keep myself really busy and I have a lot of things that I do, so this is what I’ve been working for all this time and now that it’s here, the work’s not done; it’s just continuing to improve and to reach the next level,” Spencer said. “I feel like this has been a cycle: I achieve my dream and then I have to continue and move on to the next dream. First my dream was to fight for Invicta and then it was to be an Invicta champion and then to fight in the UFC and now be a UFC champion, so it’s a never-ending cycle of setting goals, reaching them and setting new goals.”