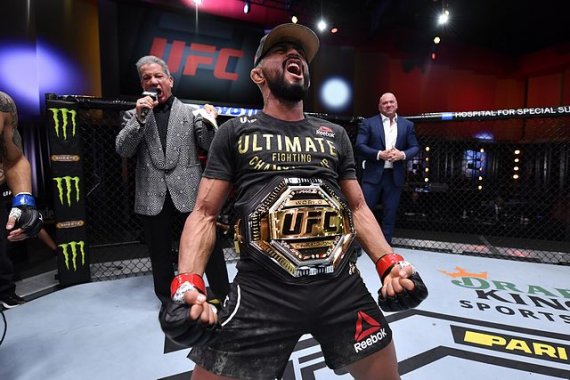 It looks like it could be a quick turnaround reigning UFC flyweight
champion and the division’s top contender.

“We’re going to keep [Figueiredo] here,” White said at Saturday’s
post-fight press conference. “He’s not going back to Brazil. We’re
going to turn him right around [in] December. That’s what we’re
working on.”

Shortly thereafter, ESPN
reported that both Figueiredo and Moreno verbally agreed to square
off at UFC 256, which takes place at the UFC Apex in Las Vegas on
Dec. 12. UFC 256 which recently lost a women’s featherweight
championship bout between Amanda
Nunes and Megan
Anderson after Nunes exited the card.

Figueiredo made his first title defense at UFC 255, where he
submitted Alex Perez
with a guillotine choke 1:57 into Round 1. The Brazilian was
initially supposed to face former bantamweight champion Cody
Garbrandt at Saturday’s event before “No Love” withdrew from
the fight due to injury.

Moreno, meanwhile, further established himself as the division’s
No. 1 contender with a first-round technical knockout of Brandon
Royval in a preliminary flyweight contest. Moreno is unbeaten
in his last four Octagon appearances, with a draw against contender
Askar
Askarov the only blemish on his ledger during that time.

“I hope UFC respects my position, my work in this company,” Moreno
said. “This night was special for me, I won in the first round, I
get the ‘W’ in the first round against Brandon
Royval. He’s dangerous. I think he’s the future of this sport
in the flyweight division. Tonight is my night and I’m the next one
for the title shot.”

Note: This item was updated at approximately 3:10 a.m. ET to
include additional information.