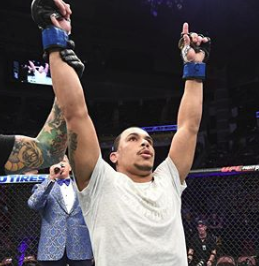 Journey Newson laid. him. out.

Journey Newson’s first Ultimate Fighting Championship triumph has been overturned to a no contest.

The change has been reflected on the event results page of record keeper mixedmartialarts.com. According to a report from ESPN, Newson’s victory was changed by the Texas Department of Licensing and Regulation (TDLR) due to a positive marijuana test.

In addition to the no contest, Newson could face and fine and suspension from TDLR.

Newson’s performance at UFC 247 was one for the highlight reels, as he dropped Domingo Pilarte with an overhand right and then finished his foe with follow-up punches on the canvas 38 seconds into their Feb. 8 encounter in Houston.

A 31-year-old native of Beaverton, Ore., Newson dropped a unanimous decision to Ricardo Ramos in his Octagon debut at UFC on ESPN 3. With the change, Newson’s professional record now stands at 9-2 with one no contest.