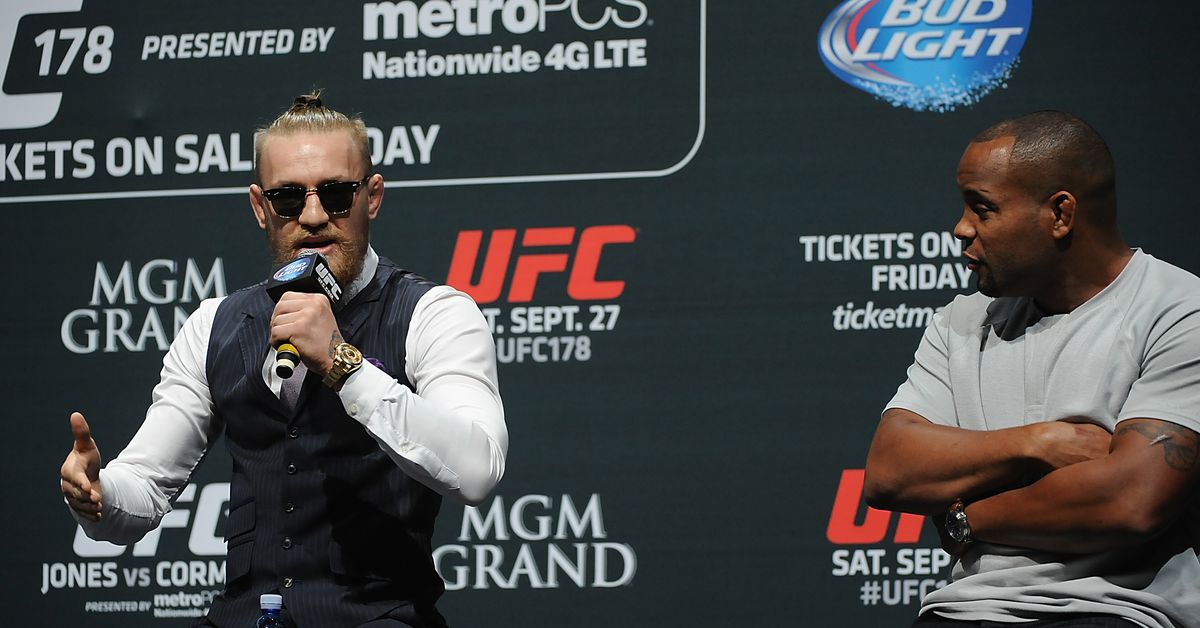 Over the weekend, Conor McGregor once again made headlines when he got into a physical altercation with Machine Gun Kelly at the MTV Awards. The scuffle was the latest in a series of social missteps from McGregor and as the former two-division UFC champion continues to make news for the wrong reasons, some members of the MMA community are questioning if McGregor is losing himself to “Notorious,” including former two-division UFC champion Daniel Cormier.

“The crazy thing about McGregor is when I say the gimmick, I mean the billionaire with the strut and the fancy cars and the money, because the reality is it’s the WWE,” Cormier said on his ESPN show. “You get a character, your character can be The Billionaire, your character can be Vince MacMahon. Vince MacMahon is the evil boss but Vince MacMahon, when he hits that curtain in the back he becomes Vince MacMahon the CEO and Chairman of the WWE. It’s the same with Ric Flair. When Ric Flair was Ric Flair, styling and profiling, kiss the girls and make them cry, woo!, all that stuff. But when Ric Flair hit the curtain in the back, he never stopped. He continued to live as Ric Flair and ultimately that was his undoing. That’s why at 60 you saw him still wrestling, because he had spent so much money, he had lived such a reckless life, it wasn’t sustainable.

Over the past few months, McGregor has been a public relations nightmare. Following his second consecutive loss to Dustin Poirier at UFC 264, McGregor went on a vitriolic tirade, threatening to kill Poirier in his sleep, and continued to make aggressive statements about Poirier and his family weeks after the bout. He also Tweeted and then deleted a horrific Tweet about Khabib Nurmagomedov’s deceased father which then started a feud with Cormier.

All in all, it’s been a regrettable year for McGregor. Aside from the bad PR, McGregor has also lost twice this year and is now stuck rehabbing his broken leg. Given the way things have been going, there have even been questions of whether McGregor should hang up the gloves and pursue his other business ventures. Topping the Forbes list of highest-paid athletes in 2020, McGregor has no shortage of other opportunities available to him, and ones that will put him in substantially less physical jeopardy, but Cormier believes that isn’t to be for “Notorious.”

“You come through the crowd. You walk through the crowd and the hands are reaching towards you, everybody’s screaming, that’s what you get from the UFC. But you don’t have a helmet on, your face is not hidden, you’re just you, as naked as you can be, walking through that see of fans where somebody wants a piece of you. It’s addicting. And when that octagon door closes, that fight, knowing that that man wants to take you out, that feeling is second to none, and for Conor McGregor, who is a fighter, you can’t replace that. A dollar amount will not equate to what you feel when you feel the mat on your bare feet, when you’re in there with the referee and the guy and you know what’s coming next. You can’t replace that with a dollar value and I think that’s why Conor will never lean into celebrity more than the actual fighter.”

McGregor is currently still rehabbing his broken leg but has said he intends to return to the cage next year and when he does so, he’s already targeting a fourth fight with Poirier.

No rematch. Jake Paul nixes Tyron Woodley rematch: ‘The guy wasn’t a man of his word’ on tattoo bet.

Business. Sean O’Malley on UFC talks: ‘I don’t think I should be main-eventing for the money I’m making right now’.

Finances. A deep dive into ONE FC’s 2020 finances showing some interesting things.

An interview with Chatri Sityodtong, CEO of ONE Championship.

Alexander Volkanovski talking about how rugby paved the way for his UFC run.

A compilation of Nick Diaz being Nick Diaz.

Apparently Conor has a Netflix series.