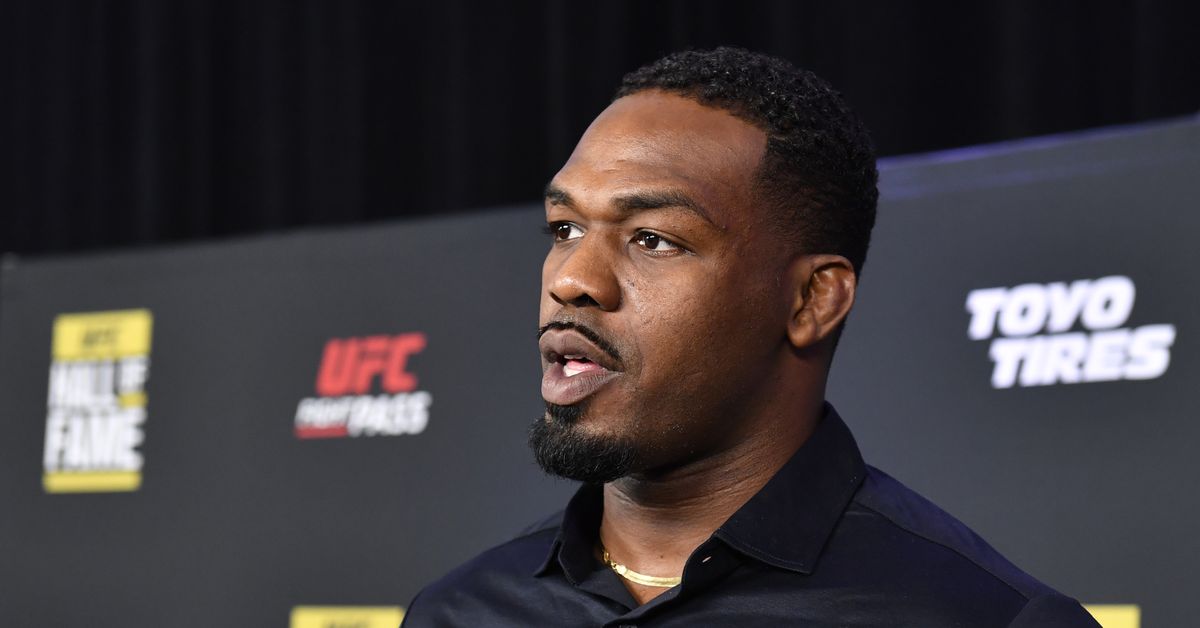 Jon Jones’ longtime fiancee Jessie Moses repeatedly refused to go back to the hotel room she shared with him at Caesars Palace the morning he allegedly assaulted her and was arrested on suspicion of domestic battery and injuring or disabling a vehicle.

A security officer called Las Vegas police in the early morning hours of Sept. 24 and reported Moses was bleeding from the nose and mouth. Although she had received first aid from security staff, she declined to have an ambulance called and didn’t want to retrieve her belongings.

“He’s actually a professional MMA fighter, Jonathan Jones, and she’s, like, refusing to go back to the room,” the security officer said in audio obtained by MMA Fighting. “We’re trying to assist her to help her grab her stuff, and she just will not go back.”

The audio reveals the moments after Moses first made contact with hotel staff, triggering the call that led to Jones’ arrest. Moses, barefoot on the casino floor, was wearing a grey sweater and grey sweatpants. She was with her and Jones’ three daughters when the security officer, who identified himself as Eduardo, called police.

“It’s a little weird, because she’s trying to get assistance, but she’s refusing to go back up to the room,” he said.

Moses eventually moved to the security office of Caesars Palace, per an arrest report released on Tuesday, while officers were dispatched to the hotel. Jones was detained on Las Vegas Blvd. in the crosswalk of The Mirage casino and allegedly smashed his head onto the front hood of a police car after he became “irate.”

Officers later made contact with Moses in the Caesar’s security office, and she told them Jones had become “a little bit” physical with her after coming back from a strip club “not very happy,” touching the back of her head and pulling her hair as she tried to leave the room. Although Moses had blood all over her clothing and dried up blood on her lower lip, she denied Jones hit her and said her lips were “really dry.”

Police said a security guard first noticed the blood on Moses’ lip and clothing when Moses approached the security booth and asked for a key to her room. When the security guard asked if she was OK, she reportedly teared up and later said she was afraid to return.

Police found probable cause to arrest Jones, who just hours earlier had been inducted into the UFC Hall of Fame for his 2013 fight with Alexander Gustafssson, and took him to the Clark County Detention Center, where he was booked and had his bail set at a total of $8,000.

During a subsequent interview with police, Moses declined to have her injuries photographed or file a protective order against Jones, her fiance of 17 years.

“She stated she was in her bed of the hotel room when Jonathan returned after being out drinking with his friends,” wrote LVMPD detective T. Byrd in the arrest report. “She said he was aggressive but not violent with her. She would not go into detail about the aggressive behavior but said she did not feel safe in the room with him. She grabbed her three daughters and left the room.

“Prior to getting her daughters, Jonathan grabbed her by the back of her hair and pulled her back toward the room. She said she didn’t feel like he was keeping her from leaving but said he didn’t want her to leave. She then got away from him, grabbed the kids and left the room.

“She took us to the bedroom where she said the altercation took place. There was blood on the bed sheets, as well as shoes strewn about. There were two fresh tissues on the floor. … As Detectives were leaving, Jessie asked ‘so how long do I have until he is out?’ She still seemed very scared as to the release of Jonathan from jail.”

Jones posted bond the evening of Sept. 24. Later, he posted on Instagram that he would “turn this nightmare into the best thing to ever happen in my life” and said “I have way too much trauma to consume alcohol, my brain simply can’t handle it any more.”

UFC President Dana White has said he will wait for Jones’ case to play out but added the former champ’s latest brush with the law wasn’t “shocking.”