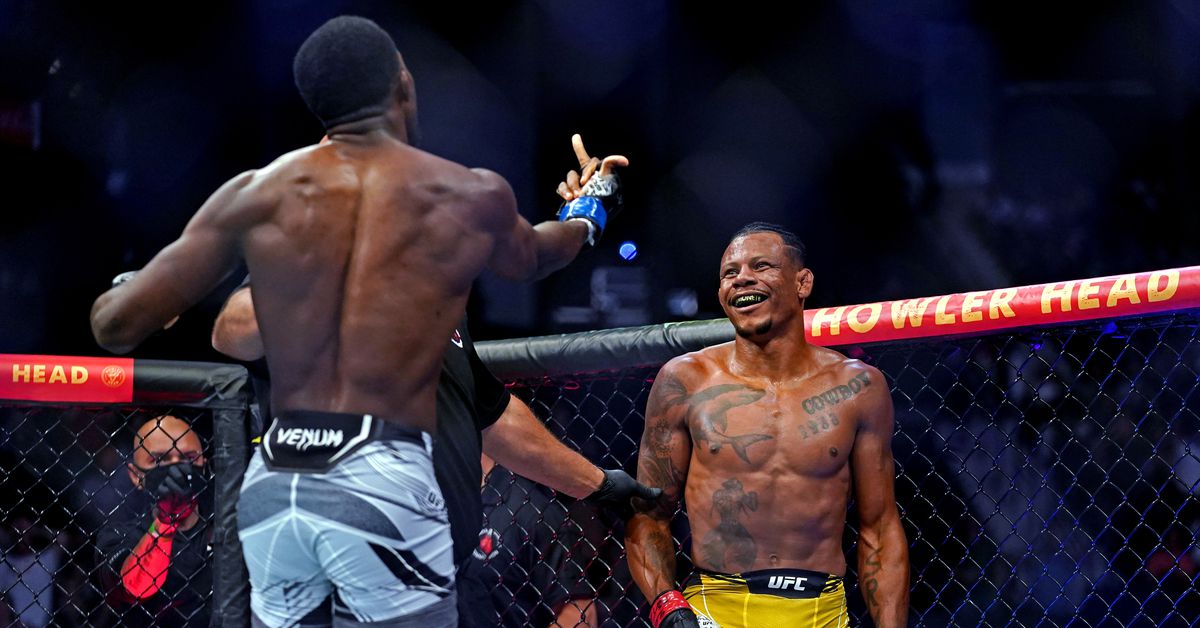 Randy Brown added insult to injury after beating Alex Oliveira at UFC 261, and at the time, he felt fully justified in doing so.

It wasn’t clear exactly why Brown and Oliveira’s fight Saturday had so much extra heat given that they appeared to be cordial with one another in the lead-up to it, but after submitting Oliveira in the first round, Brown had some choice words and two middle fingers for his foe.

Post-fight, Brown did not offer an explanation as to why he flipped Oliveira off, telling interviewer Joe Rogan that fans simply needed to head to his Twitch channel if they wanted to know more about his beef with “Cowboy.”

Brown took to Twitch on Sunday to tell his side of the story, which began with an Instagram post gone awry.

“It’s not even a real beef, I think,” Brown said. “Personally, the whole week I was good with dude. As soon as I got there, guess who I saw? He was in the hotel, in the lobby, getting checked in, I went to the store, I got something to drink and I was coming back, me and my manager, I see the dude in the hallway. I walk up to him, tap him on the shoulder, introduce myself—There’s a language barrier, he doesn’t speak English—but the universal word for respect is “oss.” So I said, “oss,” shook his hand, he smiled ear to ear, I expected it, he’s a super happy guy. And that was it. All my interviews throughout the week, I spoke about how much I respected him. I’m actually a fan of the dude. I am a huge fan of Cowboy Oliveira, don’t get it twisted, I love the way that dude fights, it’s insane. I’ve been watching him for a while.

“And I just didn’t get it. We’re backstage now—Watch his interview too, he was super respectful. He said we’re gonna beat the crap out of each other and get a drink after and I was like, yo, it’s gonna be lit. I’m gonna fight Cowboy, we’re gonna go crazy. I’m backstage, everything’s good. You know what this dude got mad for? Guess what he got mad about?… I guess it just got lost in translation, I posted a video of a dude dancing saying this is gonna be me when Cowboy starts coming out, when he starts dancing. Apparently, he thought that I was making fun of him saying this is how Cowboy looks when he fights or his whole thing when he walks out and how he fights.”

That misunderstanding apparently set Oliveira off, though Brown wouldn’t find this out until later. In fact, they were cordial with each other all the way up until the point that they took the stage to face off with one another at Friday’s ceremonial weigh-ins. Brown was excited at the prospect of standing across from the usually energetic Oliveira, but what he got was something else entirely.

“I expected him to come with the rah rah, typical Cowboy, I thought he was going to be smiling, like good energy, like goofy,” Brown said. “But it wasn’t that. It was more like he was talking something about, “two two two,” but afterwards someone translated what he was saying, like, “I’m gonna break you in two.” … Which is cool, I’m like, this dude can really turn it on, that’s fine if you want to get the crowd going. But the way it was, it was different. It wasn’t like he was selling the fight. So we got backstage, I’m like—I’m sorry this is how I operate—keep that same energy. I don’t know if I’m wrong for this, but I’m human just like anybody else. For me it was like you want to act like this, this is how we’re going to keep it.

“I saw him backstage and I was trying to talk to him as soon as we went back, he got in my face again. Security had to pull us apart. Once security pulled us apart, I’m like, ‘Bro, I’m about to f*ck you up. You’re doing a lot. This is unnecessary. I came to you respectful.”

The tension carried over into the fighters’ meeting later that day, where Brown says Oliveira was “mean-mugging” him. When Brown felt Oliviera was getting too close, he stood up and again the two had to be separated by security.

With all of the good will gone, Brown made sure to bring his full “Rude Boy” persona on fight night.

“So now we fighting, I’m not gonna touch gloves,” Brown said. “It’s personal now. So after we fight, it’s no ‘Ah, good sh*t, ah,’ keep that same energy, bro. F*ck outta here. Don’t make me to be the bad guy because y’all don’t know the story, now I’m the bad guy, I’m the assh*le trash with no class because I told him to f*ck off, right?

Fortunately for everyone, cooler heads prevailed. Their managers spoke to each other backstage and helped the fighters hash things out, starting with Brown finally having the chance to properly explain the intent behind the Instagram post that upset Oliveira.

“We ended up burying the hatchet,” Brown said. “We were backstage, I saw his manager and his manager speaks English and Portuguese and his manager came up to my team and then we all started talking. His manager was talking to my manager, it turns out he thought that I was making fun of him. So I showed him [the Instagram post] and I was like, ‘No, tell him this is me. I’m saying I’m gonna be dancing when you come out because you’re known to dance, so I’m gonna dance with you when you come out. But this is how I dance, I can’t dance.’

“So he apologized. He felt bad and he apologized and it was cool and then we took a picture and we posted that. It was cool, we buried the hatchet.”

In the end, Brown doesn’t regret any of the drama (“No f*cking regrets” he replied to one of his Twitch viewers), and he understands why their signals got crossed. From what he’s seen, the fight game is full of people who are easy to rub the wrong way.

“Fighters are sensitive, I told you that,” Brown said. “As much as y’all want to think fighters are these big, macho, whatever it is, these are some of the most sensitive motherf*ckers in the world. I’m telling you, this is why we fight. We’ve all got chips on our shoulders and a lot of people front with the humbleness and the martial arts. No, everybody got a huge ego and they’re fragile as f*ck.”

Check out Brown and Oliveira’s pre-fight media scrums below: