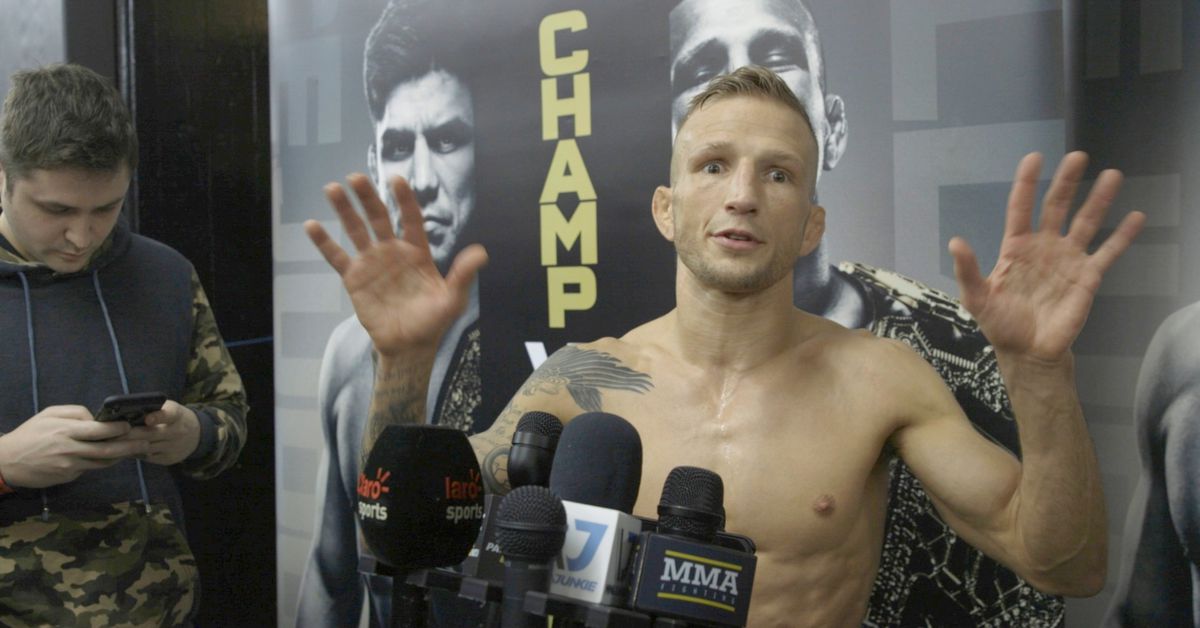 Former UFC bantamweight champion T.J. Dillashaw owned up to his error in breaking the rules, and believes his next performance will “erase” the memory of his two-year anti-doping suspension for erythropoietin (EPO).

Dillashaw, 35, is unconcerned about his critics heading into his comeback fight, a UFC Vegas 32 headliner against top contender Cory Sandhagen, and has strong words for anyone who thinks his focus is on rehabilitating his image. That’s in the past.

“Excuse my language, but f*ck your reputation,” he told reporters, including The Mac Life, on Wednesday during a media day in support of Saturday’s event at UFC APEX in Las Vegas. “You’ve got to worry about yourself. I have a great life. I have a great family. I’m just worried about my coaches, my teammates, my family. Other than that, I could care less.

“I’ve been in this game too long to scroll through the comments and think about what other people think sitting behind their computers and not having anything to achieve for.”

Right now, the UFC bantamweight belt is the thing motivating two-time champ Dillashaw as he nears a fight with Sandhagen, a former training partner who’s gone on a tear at 135 pounds and is the No. 3 fighter in the MMA Fighting Global Rankings.

“For me, it’s nice,” he said. “I’ve always done very well with guys I’ve trained with. I’m a very good guy about game planning, and I know where guys’ weaknesses are at. It’s nice for me to know that, but it all matters when the lights turn on. You can talk about practice all you want, but we’re not here to talk about practice – we’re here to do it in front of everyone.”

The audience Dillashaw hopes to impact is UFC President Dana White, who’s lining up a bantamweight title rematch between current champ Aljamain Sterling and ex-champ Petr Yan after their first outing ended in a disastrous disqualification win for Sterling. The bout is expected to take place at UFC 267 on Oct. 30 in Abu Dhabi.

“This is a real title fight, to be honest,” Dillashaw said. “I was not very impressed with Aljamain and Yan in their last fight. I think Cory Sandhagen’s the toughest in the weight class right now, and this is a true title fight. I’m the true champ coming back, and it’s time to prove it.

“I think Yan, he’s the better fighter. Watching that last performance, he did very well with his game plan against Sterling, and I think he’ll win the next fight, so I’d probably rather fight him.”

A cut in training delayed the Dillashaw vs. Sandhagen from UFC Vegas 26 in May to Saturday’s event, adding more time to a return that’s taken the ex-champ over two years to realize. Dillashaw said he endured additional scrutiny from the UFC’s anti-doping partner, U.S. Anti-Doping Agency, to make his comeback with all of his previous samples retested from the beginning of the promotion’s drug testing program.

Dillashaw believes his training has actually improved since he stopped taking EPO.

“I was dying,” he said of a flyweight title fight against then-champ Henry Cejudo that led to his positive test. “There’s no way I’d ever go to 125 again. How about this? Let’s let every one of my opponents take what I was taking. I could care less, because it did not help me. I actually feel 10 times better now than going into this fight than that fight.”

For the ex-champ, Saturday is the time to close the previous chapter of his career and stake his claim. Check out the full interview courtesy of The Mac Life.