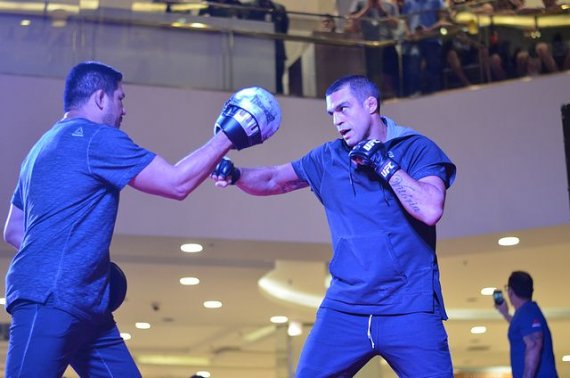 The stakes have been raised for the scheduled boxing match between
Vitor
Belfort and Oscar De La Hoya.

According to a report from
ESPN, the fight, which was formerly slated to be an exhibition,
is now a professional fight. It will be contested over eight
two-minute rounds at 180 pounds and will take place on Sept. 11 at
the Staples Center in Los Angeles. The California State Athletic
Commission has approved the change.

“(Oscar) is the one who said ‘I’m in the best shape of my life, f-
– – this exhibition B.S.’ I’m going for real.’ None of this
ballroom dancing boxing has had to endure. Both of them are in
incredible shape,” Triller co-founder Ryan Kanagaugh told ESPN.

The 44-year-old Belfort was initially supposed to face “The Real
Tarzann” Mike Holston in a boxing match on June 19 before that
booking fell through. “The Phenom” signed with One Championship
after his final UFC appearance in 2018 but never fought for the
Singapore-based promotion. Belfort is a former UFC light
heavyweight champion who has competed primarily at 185 pounds
during his MMA tenure.

The 48-year-old De La Hoya hasn’t fought since a stoppage loss to
Manny Pacquiao in 2008. An Olympic gold medalist in 1992, De La
Hoya was one of boxing’s top draws before Floyd
Mayweather Jr. and Pacquiao rose to prominence. Over the course
of his career, De La Hoya compiled a 39-6 boxing record while
capturing 11 world titles in six different weight classes.