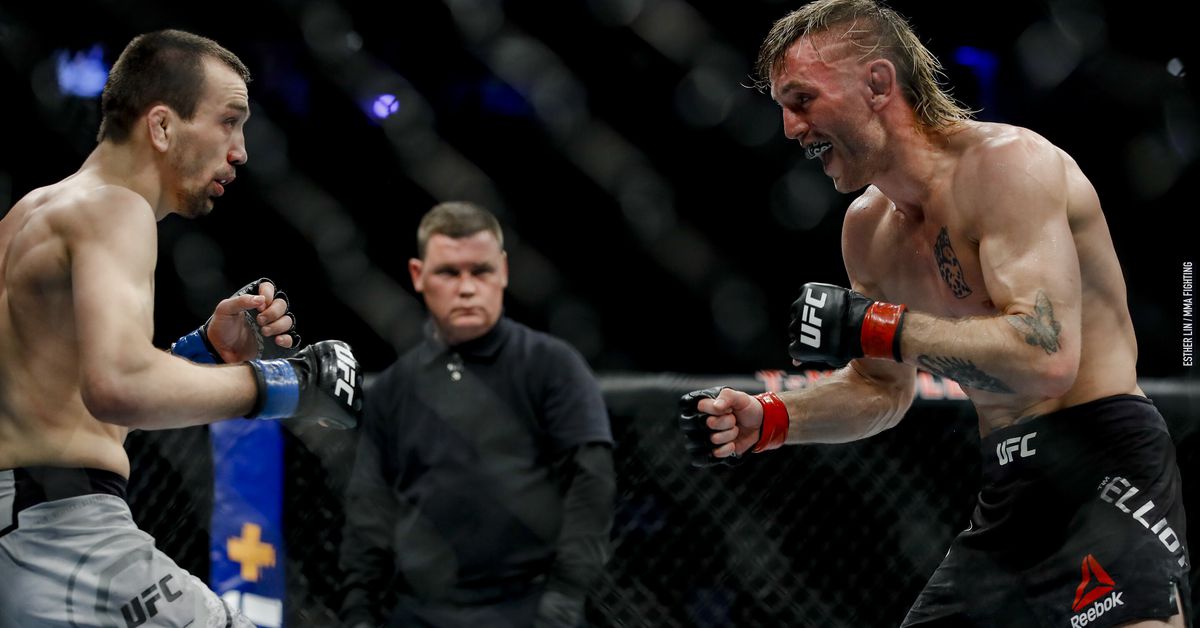 And when the final buzzer sounded after a three-round battle, he thought that was the case.

At UFC 246 this past January, Elliott went three rounds with the unbeaten Askarov, eventually dropping a unanimous decision to the Russian prospect. It was the second straight loss for Elliott, who is interested in a rematch with Askarov down the road. Based on his recollection of the first fight — or lack thereof — it would be like a new experience for Elliott.

“I had no recollection of rounds two or three. I had no recollection of ever talking to my coaches in the corner and I was almost upset. I was so knocked out that I didn’t even realize that I was tired. I was upset because I was like, ‘Man, I didn’t get a chance to go out and get tired.’ My coaches were like, ‘What the f*ck are you talking about?’”

Despite the loss, one that he hardly remembers anyway, Elliott takes pride in knowing that he competed for the three-round duration after getting rocked in the opening round. It was a more acceptable result than his prior loss to Deiveson Figueiredo, a first-round submission defeat.

Besides, even if he had been performing badly, that realization didn’t strike him until later.

“They told me and I just kind of kept my mouth shut because I obviously didn’t know what was going on,” Elliott said. “That was the first fight I ever went to the hospital afterwards. If I get to go out and perform, I don’t care if my arm’s broken or my legs are broken, but I don’t want to be in a situation like the Deiveson Figueiredo fight where I went in, I was winning the fight, I shot a bad takedown and I got caught in a submission.

“I don’t mind getting beat up, but I want to be able to perform. I want to go out and get tired. I want to show that I can go 15 minutes. At least I did that in the Askarov fight, but I didn’t get the chance to do that in the Figueiredo fight at all. But that’s just the sport, it’s a crazy game.”

When Elliott had the chance to watch the fight back, he described it as “pretty cool” and “an out-of-body experience.” An 11-year veteran, Elliott has had two separate stints in the UFC, won The Ultimate Fighter, and challenged Demetrious Johnson for a world title, but even he couldn’t have predicted that he could finish a fight after essentially being switched off in the early going.

“It was like I was watching myself but it wasn’t me,” Elliott said. “It was cool to know that when situations get that bad and I’m not in it, my body knows this is what we do, this is what we’re used to doing. I went into autopilot and my autopilot is to start punching and kicking.”

Up next for Elliott is a flyweight fight with UFC newcomer Brandon Royval this Saturday at the UFC APEX in Las Vegas. He was originally in talks to fight Jordan Espinosa, but Espinosa moved on to a fight with Mark De La Rosa, leaving a Elliott irked. He has a vision for his next three fights now, Royval, Espinosa, and a rematch with Askarov.

Ideally, those bookings would culminate in him fighting for a world title, possibly in a rematch against friend and training partner Joseph Benavidez. Though the two are close, Elliott thinks if the two were matched up again it would be a positive sign that both had reached the top of the division.

“If all goes well for me, I get a win here, get Jordan Espinosa as soon as his fight’s over and then sit around and wait, I don’t know what’s gonna happen,” Elliott said. “I would like the Askar rematch, I think Joe B is gonna fight Figueiredo again for the belt, that seems like what they’re gonna do. So I feel like if I win these two and maybe get that rematch with Askarov I can be in the mix.

“Dream coming true would be me getting to fight my teammate Joseph Benavidez. That would be good for him, and me, and my team. That would just be a storybook ending. He beat me in the UFC, he coached me in The Ultimate Fighter, we had a coach kill himself in Robert Follis, we’ve just had a lot of things together. To be able to fight Joe B for the UFC title would be a dream come true. Even though we’re friends and teammates, it would just be a best case scenario for me.”