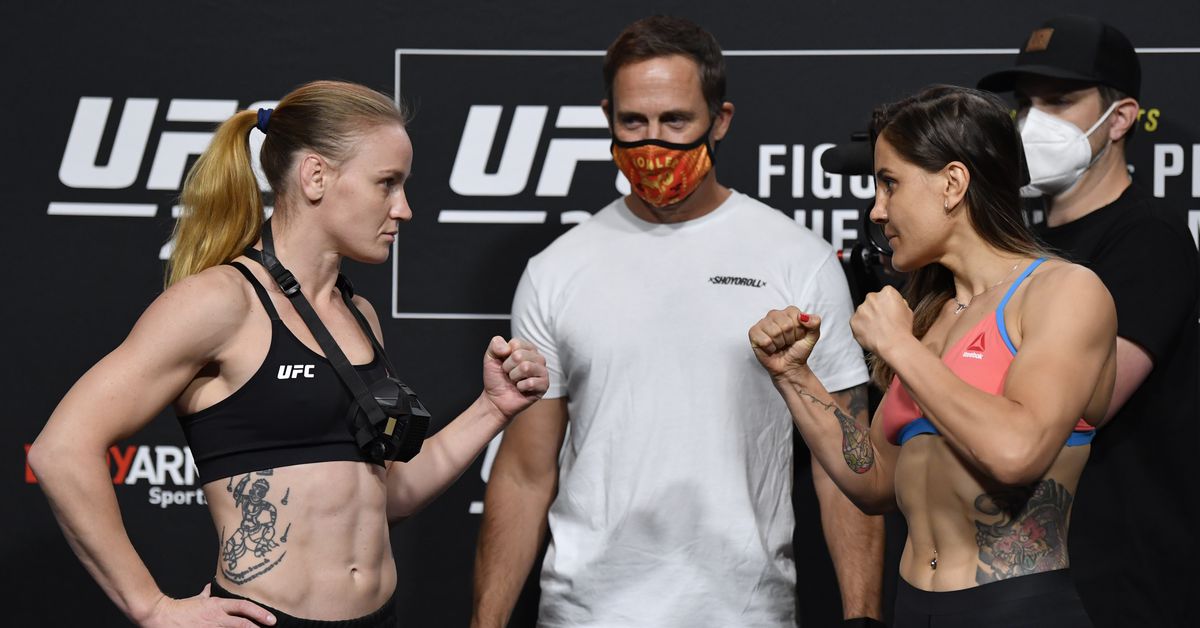 It’s never translated into big box office for the UFC, but Saturday’s flyweight showcase is a card that hardcores should pay close attention to.

At the top, there’s recently crowned flyweight king Deiveson Figueiredo, who on his way to capturing UFC gold obliterated the misconception that the “little guys” don’t finish fights. He’s one of the hardest hitters in all of MMA pound-for-pound and he decimated sentimental favorite Joseph Benavidez twice to claim his throne. Now, he steps into a pay-per-view main event spot where hopes to begin a run of title defenses that could rival the great Demetrious Johnson.

Initially, it was thought that Figueiredo’s first defense would be against former bantamweight champion Cody Garbrandt, but an injury removed “No Love” from the equation and instead a more deserving—if lesser known—candidate took his place in Alex Perez. On the strength of back-to-back Performance of the Night winning first-round finishes, Perez will make history just be stepping into the cage Saturday night as he is now the first Contender Series signee to challenge for a UFC title.

In a co-main event that easily could have switched places with the scheduled headliner, flyweight queen Valentina Shevchenko seeks her fourth consecutive successful defense of the women’s 125-pound belt. “Bullet” has been as unstoppable as her nickname suggests since returning to the division, first taking a lopsided decision against former strawweight champion Joanna Jedrzejczyk and then winning a trio of championship in bouts in which she rarely appeared to be challenged.

Former Invicta FC champion Jennifer Maia is now tasked with stopping Shevchenko’s run, a mission that has been labeled impossible by the matchmakers as Shevchenko is as high as a 20-to-1 favorite on some betting sites. Could Maia give Matt Serra a run for his money for the biggest championship upset in MMA history?

Where: UFC APEX in Las Vegas

When: Saturday, Nov. 21. The seven-fight preliminary card begins at 6:30 p.m. ET on ESPN+ and ESPN2, with the five-fight main card beginning at 10:00 p.m. ET and airing exclusively on ESPN+ pay-per-view.

I actually like Alex Perez’s chances here. He has ridiculous hand speed and when he smells blood, he’s as dangerous as anyone at 125 pounds. More dangerous than Deiveson Figueiredo? That’s a proclamation I’m not bold enough to make.

One big question mark for Perez is defense. He’s shown he can give one to take one and with his speed and precision, he usually gets the better of fast-paced exchanges in the pocket. Against Figueiredo, taking even one hard punch can lead to calamity. I do think Perez is going to give the champion problems early though as long as he doesn’t fall into his old habit of starting slow. If he lets Figueiredo set the pace, then this will be an easy night for “Deus da Guerra.”

Perez should be able to avoid any prolonged ground sequences, though if the fight goes there you have to favor Figueiredo. He’s just such a threat at every level of MMA. Perez has a lot to offer as more than just a replacement to Cody Garbrandt and if this goes all five rounds, it’s not inconceivable that he lands enough to sway the judges. The problem is making it past the second round.

In his first title defense, I don’t expect Figueiredo to need the championship rounds. He finishes Perez before the third.

Jennifer Maia is more than a worthy challenger. At her best, Brazilian is a confident muay Thai striker with pop in both hands, and she compliments that standup with an active ground game. She’s world class. The problem is that Valentina Shevchenko is a notch above that distinction.

There are simply no holes in Shevchenko’s game. She’s one of the best strikers in the entire UFC, she’s a master at controlling distance and working in the clinch, and she makes strategic use of her grappling to dictate the action. Don’t be surprised if Shevchenko mixes in the occasional takedown when she’s not slicing Maia up on the feet.

Maia will give it the old college try, but other than maybe in a strict jiu-jitsu contest, there just isn’t one area in which she has Shevchenko beat. I see the champion going up on the scorecards early and then locking in with laser-like precision to score a TKO in the second or third round.

When I think about Mike Perry missing weight by such an egregious amount, I don’t see a fighter attempting to game the system and avoid the final stages of his weight cut to gain an advantage. I see an unfocused athlete who’s career is going off the rails.

Perry’s a talented fighter, that’s never been in doubt. You don’t beat the likes of Alex Oliveira, Paul Felder, and Jake Ellenberger without having some concept of what you’re doing. But there have always been questions about whether he has a ceiling higher than hard-hitting meathead and it’s starting to become clear that he doesn’t. He’s eschewed having a proper corner, instead employing his fiancee again and a longtime friend, neither of whom are involved in martial arts outside of their association with Perry. He doesn’t seem to realize that he beat Mickey Gall in spite of a lack of coaching support, not because of it.

Tim Means is incredibly tough to finish and I don’t like Perry’s chances of outworking him over the course of three rounds should it go to a decision. Even on short notice, “The Dirty Bird” has a striking arsenal that is more than varied enough to deal with Perry. Fighters like Max Griffin, Santiago Ponzinibbio, and Alan Jouban established the blueprint for beating Perry on points. Means can successfully execute that strategy to a tee and that’s assuming that he doesn’t just put Perry out of his misery early.

This is probably the toughest fight to pick on the main card. It’s a striker vs. grappler battle to be sure, but Katlyn Chookagian isn’t necessarily a fish out of water on the ground and Cynthia Calvillo has improved a lot in the standup. I still think the outcome here will be determined by who can engineer a fight that plays most to their strengths as opposed to necessarily who is more well-rounded.

In that case, I’m leaning towards Calvillo. She’s a grinder and she has the athleticism and durability to close the distance on Chookagian early. Chookagian has enough of a ground game to keep Calvillo from doing too much damage down there, but I predict that Calvillo will have a lot of success stifling Chookagian and maintaining top control for much of the fight. When she’s not on top, she’ll frustrate Chookagian by holding her against the fence and working to drag her back to the mat.

If Chookagian had a more stopping power, I’d probably favor her to keep Calvillo at bay. As it stands, I don’t think her volume striking will be enough to deter Calvillo from trading shots until she can get inside for a takedown. Calvillo wins on points.

In their first fight, I would have given the edge to “Shogun” two rounds to one. This time, I think Paul Craig improves on that past performance and gets the job done.

Frankly, this pick is simply a matter of assessing how much Shogun has left in the tank as he approaches his 39th birthday, which is just around the corner. He’s six years older than Craig and while his skills are as sharp as ever, he only has so many wars left in him and his third bout with Antonio Rogerio Nogueira had to take a toll. His wrestling will be a factor as I’m sure he’ll look to employ a similar strategy to the one he used in the first Craig fight, utilizing smart top control to give Craig no avenue for one of his sneaky submissions.

Craig cannot afford to give up top position so easily this time around. As effective as he is from his back, against an experienced grappler and ground-and-pound artist like Shogun it’s imperative that he not only attack from bottom but work to get up or sweep. Because on the feet he absolutely has the potential to out-strike Shogun, who’s chin is just about ready to call it a day.

They’ll go to the judges again, but this time Craig leaves the octagon with a clear victory.