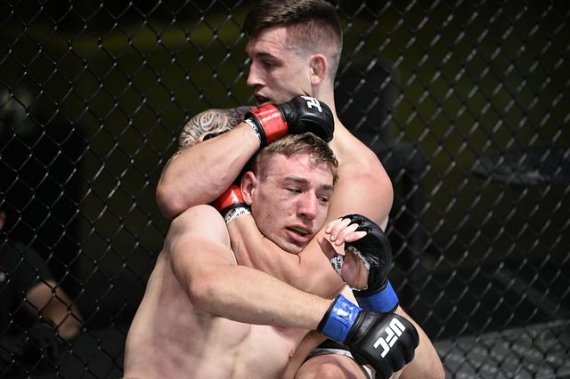 A middleweight clash pitting Brendan
Allen against Brad
Tavares is on tap for an Ultimate Fighting Championship event
on Dec. 4.

Allen initially announced the bout on social media. The card is
likely to take place at the UFC Apex in Las Vegas but does not have
a main event at this time. Other reported matchups for the card
include Jimmy Crute
vs. Jamahal
Hill and Brad
Riddell vs. Rafael
Fiziev.

A former Legacy Fighting Alliance champion, Allen has been
victorious in five of his first six promotional appearances, with
his lone defeat coming at the hands of Sean
Strickland. The Dana White’s Contender Series alum is 2-0 thus
far in 2021, with a submission win over Karl
Roberson and a decision triumph against Punahele
Soriano to his credit.

After suffering back-to-back losses to Israel
Adesanya and Edmen
Shahbazyan from 2018 to 2019, Tavares has returned to post a
2-0 mark this year. The 33-year-old Hawaiian took a unanimous
verdict over Antonio
Carlos Jr. at UFC 257 before capturing a split-decision triumph
against Omari
Akhmedov at UFC 264 to run his career mark in the Octagon to
14-6.