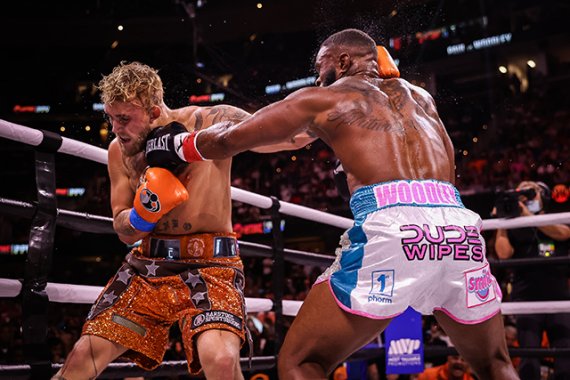 It appears that both Jake Paul and
Tyron
Woodley were fighting clean during their boxing match last
month.

Paul and Woodley submitted urine samples prior to the Aug. 29 event
in Cleveland and the results came back negative, according to the
Ohio State Athletic Commission. Initial reports stated that Paul
and Woodley would not be tested in relation to their bout before it
was confirmed that the fighters would have to submit urine samples
to the commission. Prior to the event, Woodley hinted that he
believed Paul was on performance-enhancing drugs.

Paul
defeated Woodley via split decision in their matchup at the
Rocket Mortgage FieldHouse to improve to 4-0 as a professional.
Woodley, a former UFC champion, was making his pro boxing debut.
Both men
earned a disclosed $2 million payday for their efforts.

Four other fighters — Amanda
Serrano, Yamileth Mercado, Charles Conwell and Juan Carlos
Rubio — from the event were also tested, and their results were
negative as well. Those athletes were required to take drug tests
because they were involved in title bouts.