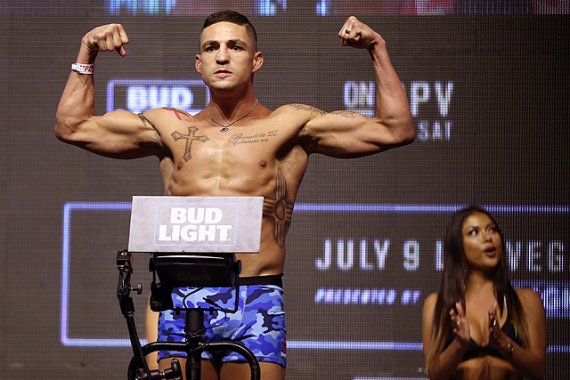 Diego Sanchez will get to compete in his home state when he faces Michel Pereira at UFC Fight Night in Rio Rancho, N.M., on Feb. 15.

The Las Vegas-based promotion announced the welterweight bout on Wednesday. UFC Rio Rancho takes place at the Santa Ana Star Center and is headlined by a light heavyweight rematch between Jan Blachowicz and Corey Anderson.

Sanchez re-signed with the organization after concluding his previous contract with a decision loss to Michael Chiesa at UFC 239 in July. That snapped a two-fight winning streak for “The Ultimate Fighter” Season 1 winner, who was coming off back-to-back triumphs over Mickey Gall and Craig White.

One of the most flamboyant strikers to enter the promotion in recent memory, Pereira debuted in the Octagon with a memorable first-round KO of Danny Roberts at UFC Fight Night 152 in May. However, he struggled mightily in his next outing, losing a lackluster decision to Tristan Connelly at UFC Fight Night 158 on Sept. 14. The 26-year-old Brazilian is 23-10 with two no contests over the course of his professional career.