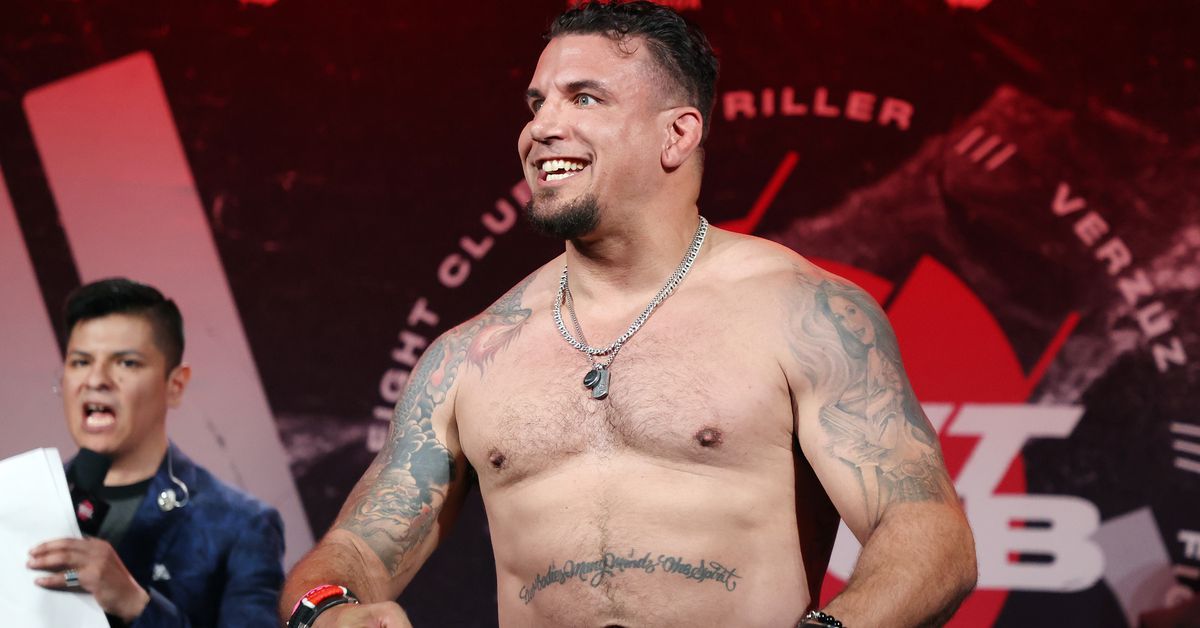 Frank Mir has been a part of some of the biggest events in mixed martial arts history over the course of his 20-year run in the fight game.

But according to the former UFC heavyweight champion, nothing Mir has competed in will match the payday he’s earning for his mixed rules match against ex-boxing champion Kubrat Pulev in the main event of Triller’s Triad Combat show this Saturday night.

“The second Brock [Lesnar] fight [at UFC 100] was close, but that was the second-biggest of my career. But no, this one [is the biggest],” Mir revealed Wednesday on The MMA Hour.

“In fact, if I hit my bonuses and I win, I’m basically touching on seven figures, and I’ve never been within a couple $100,000 of that in the MMA world.”

If true, that’s a noteworthy feat for the 42-year-old to pull off at this stage of his career.

Mir competed in five UFC championship bouts during his octagon run and twice captured either an interim or undisputed UFC heavyweight title. He fought a litany of Hall of Fame names and even collided twice against the division’s all-time cash cow, former UFC champion and WWE superstar Brock Lesnar, with the second of their battles at UFC 100 selling over 1.6 million pay-per-views and holding the UFC’s all-time pay-per-view record until 2016, when it was finally bested by Conor McGregor vs. Nate Diaz 2 at UFC 202.

“I think that’s a testament to what Triller is doing, pushing the paydays and sharing the income,” Mir said. “I mean, here, I realized this a couple years ago, this is kind of bittersweet for me — I looked at the amount of pay-per-view buys that Deontay Wilder and Tyson Fury sold, and what they took home for paydays. Me and Brock sold more pay-per-views, and I didn’t take nowhere near as much as either one of them.

“I think Brock and I, combined, didn’t take 10 percent of what they did.”

For Mir, the money was just one of several reasons why he jumped at the chance to test himself against Pulev. Another was the personal challenge of the experience itself.

Mir surprised many observers when he made his professional boxing debut against ex-champion Steve Cunningham at April’s Triller event. He likely surprised even more by lasting to a six-round decision loss with Cunningham despite being a significant underdog.

It was all part of Mir’s desire to push himself into new and uncomfortable territories as he plays out the final years of his combat career. Mir said Wednesday that he’s not entirely done with MMA, and that he could be lured back at some point, but for right now he’s content with the path he’s on and is grateful for Triller’s willingness to experiment as it has.

“The last part of my career, I’ve been really pushing to try different things and really push the striking aspect of my martial arts training,” Mir said. “I always felt I had the Michael Vick curse — every time I fight an MMA fight, even if I knock out Mirko [Cro Cop] or Cheick Kongo with an overhand left, everybody talks about submissions; which, I’m accomplished there, but now I’m a part-owner of Syndicate [gym] now and I’m coaching there, and my daughter obviously now with her career, I wanted to push and showcase that I’m skilled in all aspects of MMA.

“In fact, in my opinion, I’m the most knowledgeable MMA fighter that there is in the world, and so I just wanted to showcase that also my striking skills are also very knowledgeable, I knew what I was doing. So I jumped into the boxing match with Steve Cunningham and I think I made a good showing of my boxing range there. And here, when this opportunity came up, I was like, oh, trying new things and pushing myself. It still doesn’t allow me to do takedowns or use my ground skills, but I think this definitely helps close the gap as far as competing with a boxer, because now I can utilize my clinch.”

Triller’s Triad Combat event is certainly venturing onto different ground than Mir is used to. The card essentially hosts a lineup of matchups pitting boxers against MMA fighters — featuring former UFC names such as Mike Perry and Matt Mitrione — in a triangular ring with a rule set designed to “level the playing field” between the two sets of athletes. For example, fighters will be allowed to operate with much more freedom in the clinch, MMA techniques such as spinning backfists will be legalized, and the gloves used on Saturday will be more akin to MMA gloves than boxing gloves.

It’s a rule set that Mir believes he’ll be able to use to his fullest advantage, even if Pulev is a 15-to-1 betting favorite to win on some sportsbooks.

“I just make it everything but a boxing match,” Mir said. “It’s too close to the fight to really worry about letting the cat out of the bag, but yeah, behind every punch, he’s not going to be able to throw combos. Every punch, I’m grabbing him afterwards, and then I’m going to work the clinch and just drag on him and really push his grappling cardio, which he doesn’t have to the experience that I do. It’s different. You can ask anybody’s who’s fought MMA — the first time you wrestled with somebody, stood up, and then you had to throw punches again? It’s a different feeling, and it takes a lot of acclamation.

“I have 20 years of doing it, and my endurance and my understanding of how it works, being relaxed and able to still fire off. So obviously boxing at range, even if I thought I was better than him at that, why would I? That’s what he’s best at, where he’s most comfortable, where his heart rate is going to be low. I’m going to jump on him and rag-doll the hell out of him.”