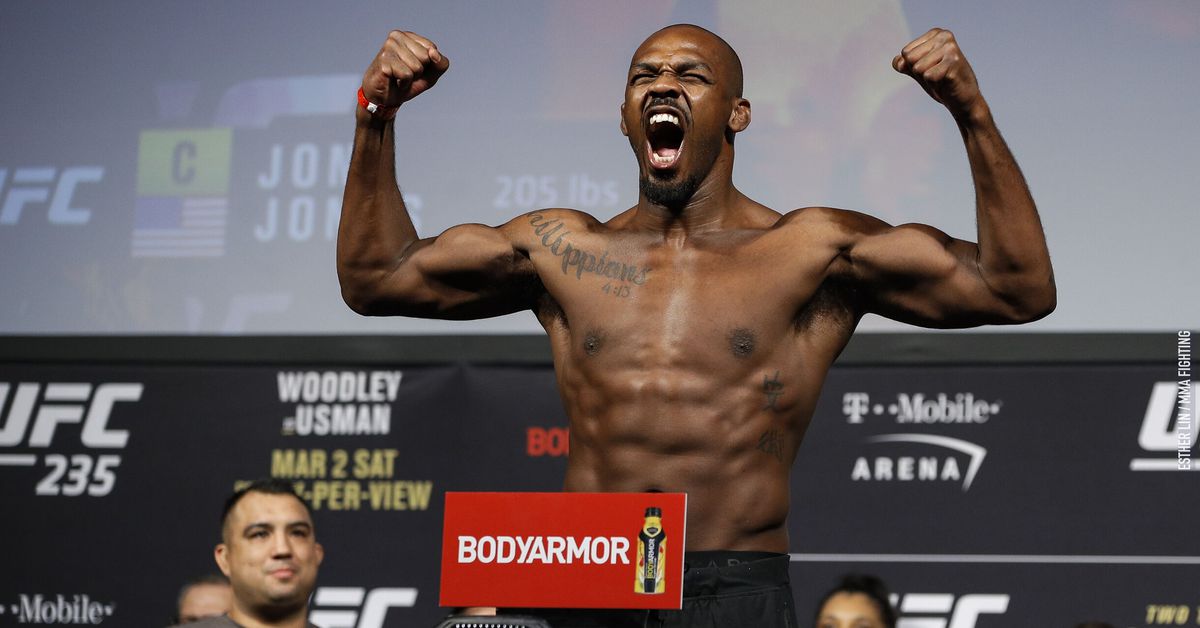 Jon Jones is keeping the faith that an eventual showdown against UFC heavyweight champion Francis Ngannou will happen.

While the former light heavyweight champion’s tone lately has been far more pessimistic after engaging in a very public spat with the promotion over his potential payday for a fight with Ngannou, Jones offered a lot more hope when speaking about the matchup this week.

“I think it’s gonna happen,” Jones told Fight Hype in an interview published on Thursday. “I think the UFC eventually will do the right thing. I think this is one of the greatest fights of our generation and it would be really sad if it weren’t to happen. I believe that it will. It would be a real tragedy [if it didn’t happen]. It’ll happen.

Jones’ battles with the UFC over his salary for a fight against Ngannou stretches back further than just the latest dispute. Almost exactly one year ago, Jones teased a possible move to heavyweight after he went back and forth with Ngannou in a series of social media posts.

Unfortunately for fans, talks for that fight started and finished rather quickly with Jones claiming the promotion had no interest in actually negotiating with him while UFC President Dana White later alleged that the former light heavyweight champion was asking for “what Deontay Wilder was paid” after the boxer reportedly earned $30 million for a rematch against Tyson Fury.

Following Ngannou’s win over Stipe Miocic to claim the UFC heavyweight title, Jones tweeted “show me the money,” which ignited a whole new feud with White over his demands to make the fight happen.

While it doesn’t appear Jones has engaged in any further dialogue with the UFC regarding the Ngannou fight, he remains positive that the two sides will eventually come to terms on a deal and he’s staying ready just in case.

“Right now, we’re just training,” Jones said. “We’re training and just focusing on things we can control, which is being in the best shape and I think me just getting in shape sells the fight even more. People want to see two titans and Francis is already a titan and I’m trying to become a titan. I want to look like a titan. I want to be the same size as this guy if not bigger when we get out there. I’ve got a lot of work to do.

“Hopefully the fight happens. We’ve just got to stay focused, stay training and see what the UFC is going to do on their part.”

As far as the timing goes, Jones isn’t in a rush to strike a deal with the UFC just so he can be the first person to face Ngannou now that he’s champion. Jones knows patience is a virtue and he’s willing to wait for the right deal to come along so he can finally make his heavyweight debut.

Without a fight scheduled, Jones is taking advantage of the time off in order to get his body acclimated for the move to heavyweight after competing at 205 pounds for his entire career.

According to Jones, he’s feeling better than ever and it appears heavyweight was probably his ideal division all along.

“It feels awesome to train heavy,” Jones said. “Good to eat whatever I want, obviously I’m on a great diet right now but get to eat tons of food, a lot of rest. Right now, I’m just living like a total athlete.

“I’m excited to compete at my full potential going in there without a weight cut. I have two brothers that are really big boys and I feel like this is the guy I was supposed to be the whole time.”