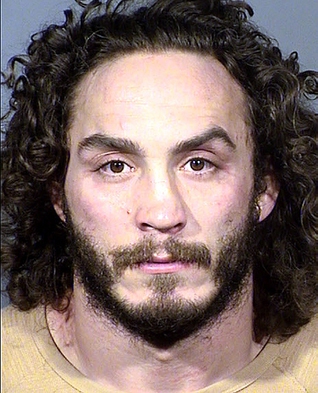 Former Ultimate Fighting Championship competitor Anthony
Rocco Martin was arrested in Las Vegas over the weekend on
misdemeanor charges of battery and lewd conduct in a public place,
according to the
Las Vegas Sun.

According to a Metro Police arrest report, Martin was witnessed
urinating on the hallway floor at Caesars Palace at about 1:30 a.m.
local time on Saturday. Security manager Nathan Wilson and multiple
other security guards confronted Martin near the elevators and
asked him to leave the property. Martin refused the request and
then was unwilling to show identication before threatening
security. When Wilson told Martin he was in danger of trespassing
and put his hands up to tell him to step back, the UFC veteran
punched him in the throat.

After the punch, Martin was taken down to the floor by security and
placed in restraints. Police arrived on the scene and observed
security footage of Martin urinating and punching Wilson, according
to the report. Martin was then transferred into police custody.
Martin, who is white, told police he was being racially profiled in
the incident.

Martin was released on his own recognizance Saturday, according to
court records. A hearing scheduled for Jan. 19, and Martin has
retained Nicholas Woolridge as his attorney.

A 31-year-old native of Palos Heights, Ill., Martin hasn’t fought
since falling to Neil Magny
via unanimous decision at UFC 250 on Jun. 6. That bout was the last
fight on his UFC contract, and he has since parted ways with the
Las Vegas-based promotion. He underwent knee surgery to repair a
torn meniscus following the loss to Magny, and further
complications resulted in an infection after the procedure. Martin
has since recovered. He went 9-6 during his Octagon tenure and is
17-6 as a professional overall.