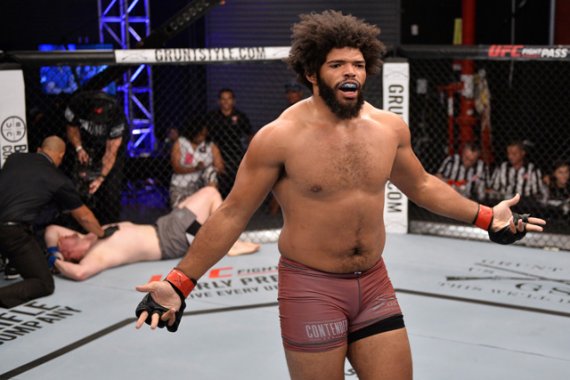 NEW FIGHTER SIGNING
There is a new heavyweight in town! We are thrilled to announce the signing of @chosenjuan285 at @ares_fighting. Expect the 28-yr-old UFC veteran, under the tutelage of @JacksonWinkMMA, to wreak havoc at a future #ARESfighting events! #MMA #heavyweight pic.twitter.com/GRfkRdry3B

Juan Adams is the latest former UFC talent to sign a contract with Ares Fighting Championship.

The promotion announced the addition via social media on Tuesday. A date and opponent for Adams’ Ares FC debut were not revealed.

“There is a new heavyweight in town! We are thrilled to announced the signing of [Juan Adams] at [Ares FC],” the statement read. “Expect the 28-year-old UFC veteran, under the tutelage of [Jackson-Wink MMA], to wreak havoc at future #ARESfighting events.”

Adams was released from the UFC after consecutive losses at the hands of Justin Tafa, Greg Hardy and Arjan Singh Bhullar. “The Kraken” began his pro career with a trio of first-round finishes under the Legacy Fighting Alliance banner before earning a UFC deal with a TKO of Shawn Teed on Dana White’s Contender Series. He defeated Chris de la Rocha in his Octagon debut before embarking on the three-bout skid that prompted his exit from the Las Vegas-based promotion.

Adams joins UFC veterans such as Nordine Taleb, Wilson Reis and John Moraga on the Ares FC roster. The fledgling promotion’s second event is scheduled for April 3 in Brussels, Belgium.